The second week of my spring 2017 trip to Italy brought me back to Tuscany, to Siena, the beautiful Medieval city that has become my defacto home. I always try to see and do different things upon every visit. This time, I spent two wonderful days exploring the Tuscan countryside with my friend and author Dario Castagno.

On day one, we headed south of Siena, through the Crete Senesi, an area of lush rolling hills. “No matter what side of (Siena) you leave from, you’re in the countryside,” Dario said. “Not a lot of people live here.” And you see that by the few stone houses that dot the landscape. “You can go hours driving here without seeing any other people.”

But what you do see, from every angle and along every road, are rows of cypress trees, a town on a hill, olive groves and vineyards. And then you turn left down a dirt road and it starts all over again.

Our first stop was in a small community called Murlo to visit an Etruscan museum.  The Etruscans were a wealthy civilization in ancient Italy, dating back to 700 B.C.  The artifacts here come from an archeological dig, an area called Poggio Civitate.  One piece, a man sitting in a chair wearing what appears to be a sombrero, has become the symbol of Murlo. There are other riches on display, likely from tombs, and panels that show horseracing.

After a visit to the Fattoria dei Barbi winery for a tour and lunch, we stopped to see the Abbey of Sant’Animo, a beautiful Romanesque church near Montalcino.  Monks were singing chants there up until last year. The abbey was founded in the era of Charlemagne and the church was built in the 12th Century. I’m sorry to have missed the monks.

Inside the church of Sant-Animo, built in the 12th Century.

Outside the church at Sant’Animo. 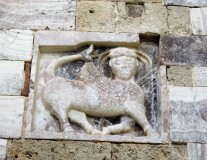 Close-up of facade of Sant’Animo.

We ended the day in Montalcino, the charming hill town famous for its Brunello di Montalcino wine.

The last time I was in Montalcino was October 2003 with my mom. That trip was a celebration of her successful kidney transplant in March that year. My Uncle Charlie was already in Italy, in Cortona, and we met him there. He was the perfect guide. In one day, we visited Montepulciano, Pienza, Lucignano and Montalcino, all picture-perfect Tuscan towns. So when I returned that day in April, I remembered watching my mom walk up those streets with energy she hadn’t had for a year, during a really crappy run of dialysis.

Upon arrival at Montalcino, the first thing you see is the fortress at the entrance of the town, which now houses an enoteca. Concerts and festivals are also held in the courtyard.

The fortress at Montalcino, built in 1361, atop the highest point in the town. It houses a large enoteca now and concerts are held here in the courtyard in the summer.

Outside the fortress at Montalcino. The town holds concerts inside the grounds, which also houses an enoteca.

Walking around Montalcino is a treat. There are small shops of Tuscan specialties, such as the afore-mentioned Brunello, cheeses, pastries and cantuccini cookies and plenty of wine bars and small restaurants. We walked around the perimeter and back through the center, with me snapping photos of side streets, windows, doors and anything else I passed.   I loved being there again. 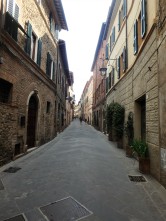 A street in Montalcino

There’s always a view in Montalcino 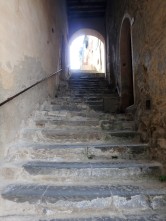 Brunello producers ask artists to design labels for their vintages. The samples are displayed on this wall in the town. 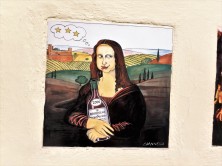 An artist’s idea for a label for a bottle of Brunello. I’d buy it!

Day two was all about Chianti. There are four boroughs in Chianti: Greve, Radda, Gaiole and Castellina. The region is 80 percent woods. The rest is cultivated vineyards and, by law, it will stay that way. A quick refresher: Chianti is an area within Tuscany. If you drink a wine that has the black rooster on the label, it is a Chianti Classico and was produced within the Chianti region. The grapes are sangiovese.

We started the day at the beautiful Castle Brolio, the estate of the Barone Ricasoli family. Ricasoli is the largest winery in the Chianti Classico region.  Barone Bettino Ricasoli invented the Chianti formula in 1872. 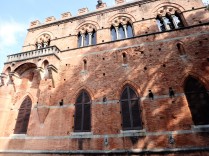 On the grounds of Castle Brolio

OK, so look at these photos. I think it’s an optical illusion. Is the point at the bottom of the column attached to the building or not?

Castle Brolio. From this view, it looks like the tower’s point at the bottom is attached to the building. 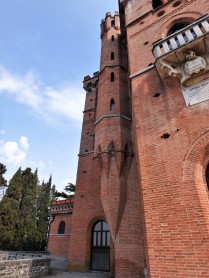 Castle Brolio. From this view, I’m not so sure that it’s attached.

Dario walking along the perimeter of the castle

Training the vines of the Ricasoli vineyards, outside of Castle Brolio

Outside of Castle Brolio

This was a treat. We stopped at the big double tree that was featured in the 1996 movie, “Stealing Beauty,” starring Liv Tyler, among other big names. In my opinion, the star of the movie is the Tuscan countryside.

We then stopped in Volpaia, a tiny village in Radda, hopefully to visit a friend of Dario’s who owns a restaurant. I knew her from Dario’s books and it would have been fun to meet her. But the restaurant was closed. So we ate at an osteria in Radda, passing a gorgeous trove of cypress trees, apparently the only place where they’re not transplanted and grow naturally.

At Volpaia, a small village in Radda in Chianti. We came here to have lunch at the restaurant of Dario’s friend who he writes about in some of his books. Alas, the place was closed that day. (not pictured) 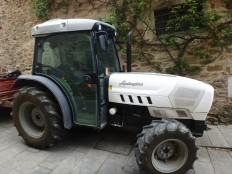 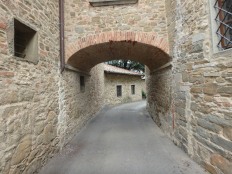 Some ceramics in Volpaia. 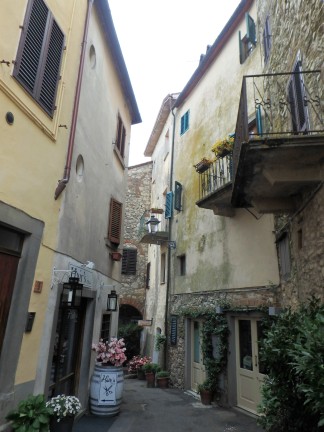 A typical street in a small village in Chianti. I love this place.

At La Bottega di Giovannino, where we ate lunch.

On the wall in the osteria where we ate lunch.

We then visited an Etruscan tomb site in Castellina.  This was really fascinating. The tombs are dug under a circular mound, have four entrances and inside each large tomb there are smaller rooms that branch off.  This was the first time I’d done any real sightseeing about the Etruscans.

Another entrance of the Etruscan tomb, buried under the Tumulus of Montecalvario. There are four burial chambers inside, each with a main burial room and connecting cells. The tomb dates back to six century BC but was discovered in the 16th Century. It was excavated in 1915. 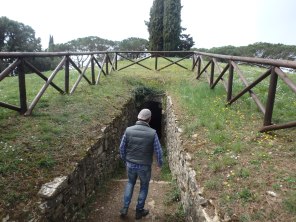 Dario walking into one of the tombs in Castellina. 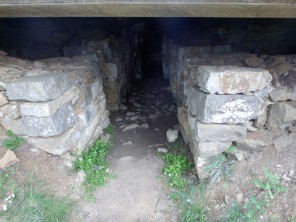 An entrance to the Etruscan tombs, excavated in 1915. Decorations in iron and bronze were found inside, likely ruins of a war chariot.

We ended the day on a perfect note: with gelato at a popular gelateria in Castellina.

The best way to end a terrific day.

Perfect end to a great day.

Check out Dario’s books at www.dariocastagno.com. Need some fun summer reading about Tuscany? I recommend any of them. 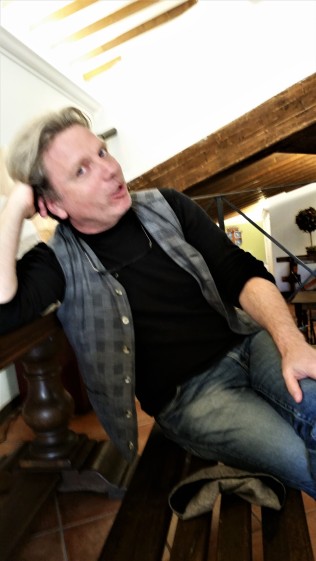 My friend and author Dario Castagno. 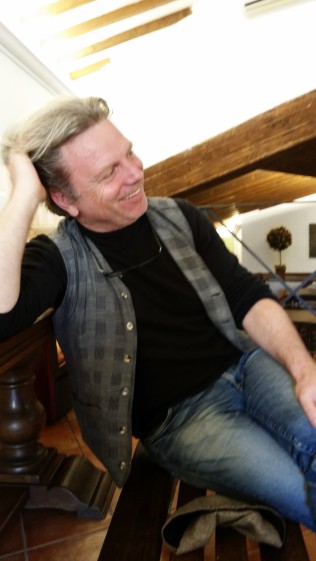 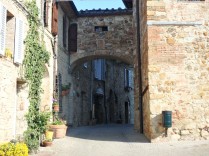 The streets of Murlo, a small community that is home to a major Etruscan museum. 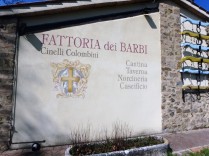 Our second stop of the day.

Wines for the tasting. Yes, you’re looking at three Brunellos. Yes, they were very good. It doesn’t matter that it was 11:30 a.m.

Wine tasting at the winery. There are worse ways to start a day.

Castelnuovo dell’Abate, outside of Montalcino. The Tuscan countryside is just so beautiful. 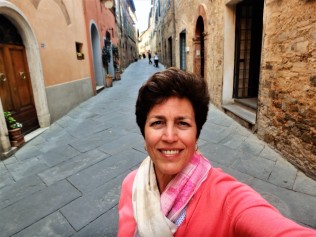 Selfie. Of course. (Is Mona laughing at me?)

I love flowers and I love Tuscan flowers. 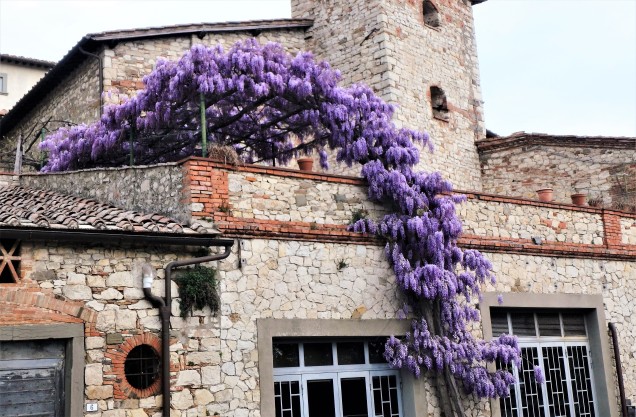 One thought on “Taking a drive around beautiful Tuscany”