Those few hours in Bevagna trying to find the bus to take me to Montefalco were a distant memory once I was in my seat  and heading into the hills of Umbria. The drive alone was worth it. We just kept going up, up and up. The view was wonderful.  Upon arrival, I walked through Porta Sant’Agostino, a large Roman gate and tower, and, as per usual in an Umbrian hilltown, I walked up the street to get to the center of town.

Via Cavour in Montefalco

On Via Cavour, looking back on the Porta Sant’ Agostino.

I ate lunch at what appeared to be a touristy place, called Il Verziere, but I didn’t care. Apparently the owner collects things, like musical instruments, money from all over the world and credit cards. (There were several in a frame on the wall). It wasn’t really kitsch but it came close. The classic jazz swooning out of the speakers was a nice touch.

The ceiling of the restaurant Il Verziere, where I ate lunch. There were instruments all over the place.

More instruments on the ceiling.

Framed money, corks and a really great photo. Il Verziere kind of had it all.

Par for the course with the way my day was unfolding, all the lunch specials contained truffles or mushrooms. I like neither. The waitress did her best to accommodate me but it seems every time she approached me with a new dish, there was something in it I didn’t like. Was this really happening? I was at a restaurant in a small town in Italy and I couldn’t find a local specialty to eat? I ended up with a plate of tagliatelle with tomato sauce. It was delicious, of course, but talk about boring. I was actually embarrassed.

But the antipasto was fantastic. This plate of big green olives was staring at me, and three big chunks of bread, already doused with olive oil and spices, was by its side. I then ordered the local gutsy red wine: Sagrantino di Montefalco. Hopefully that made up for my lack of adventure with the truffles. I was given this ridiculous-looking half-glass/half-bottle for drinking it. I assumed it was all about aerating the wine. I’m not a Sagrantino expert so I was game to try it.  Glad I did.  It was pretty bold and pretty delicious. I ordered some chunks of parmigiano reggiano to go along with it. It was a nice respite and I was content. 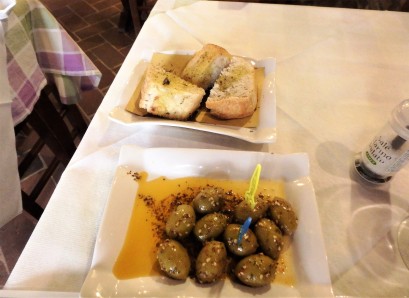 The appetizer. Those olives were so good. And spicy! The bread? Divine.

This is the wine ‘glass’ I was given to enjoy the town’s signature wine, Sagrantino. Can you see the top? It’s silly.

I continued the climb up the street and stopped to see the church of St. Agostino. The caretaker inside showed me around. The walls were mostly bare because the frescoes have deteriorated and some were destroyed during Napoleon’s era. Yet, inside the sacristy, the frescoes were beautifully preserved. Tip: Always talk to church caretakers. They are very knowledgeable.

I reached the Piazza del Comune, the center of town and soaked in the views. There’s something about a main square in Italy that requires a pause on a stoop or a glass of wine at an outside table. I skipped the latter, enjoyed the former. Then I took a few streets that branched off and enjoyed the panorama of the countryside. Green rolling hills, dotted with houses. Very green.

The Piazza del Comune. This is City Hall.

Street leading to the piazza.

Umbrian countrysid outside the walls of Montefalco

Next stop was the museum and former church San Francesco, the most important monument in town. Like inside the Basilica of San Francesco in Assisi, there are frescoes here that depict the life of St. Francis. These are painted by Benozzo Gozzoli,  known for his frescoes in the Medici Palace in Florence.

Inside the former church of San Francesco. 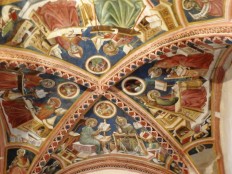 The former church of San Francsesco.

“Madonna and child with Saints” is in the art museum connected to the former church of San Francesco. I thought it was interesting because it depicted another saint, St Fortunatus, holding a model of Montefalco.

What I found the most interesting in the museum, a former monastery, were the relics from the friars’ winemaking days.  There were presses, casks, tools. (read about it here: http://www.museodimontefalco.it/en/the-franciscan-wine-cellars-inside-the-saint-francis-complex_13.html)

I lingered a bit longer in the center, relaxing, writing my journal and thinking about how, just a few hours earlier, I was a tad exasperated, trying to find a bus. I stopped in a wine shop (there seems to be one about every 20 feet) and bought a bottle of Sagrantino and headed out of town, back to the big bus parking lot.

And wouldn’t you know it. The 6 p.m. bus showed up on time. It brought me back to Foligno, again, and I hopped on the train back to Assisi. Once there, I stopped in a very popular bar in the center, just in time for an aperitivo with the rest of the town’s twenty-somethings. As I sat with a glass of Grechetto, my new favorite white wine, I thought about my week in Umbria. I enjoyed discovering the small towns and the people here are friendly and very helpful.  It turned out to be good day after all. 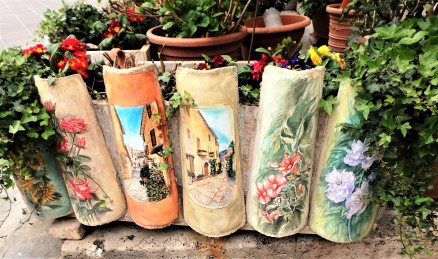 Yes, I took a photo of a pigeon. I liked his perch.

Signs outside the Scaccia Pensieri wine bar. “May whoever doesn’t drink wine, be also denied water by God.”

Top: Here we organize recovery classes for teetotalers. Middle: Campari shots Bottom: I loved him, and then I ordered a small beer. (not quite sure what that means. anyone?)

No wi-fi, only wine… and browsing is a pleasure.

Top: “The beauty of wine is that, for two hours, your problems are someone else’s.” Below: “The only weapon I need is a corkscrew.”

Justice of the Peace