My Italy adventures continued this summer with a trip to Piedmont, in the wine region of Langhe, home to two of Italy’s most famous wines, Barolo and Barbaresco. It’s the classic picturesque Italy I’ve come to expect – small hilltop towns that look like they’re right out of central casting for a romantic movie, manicured rows upon rows of grapevines, hazelnut bushes, cobblestone streets, Medieval castles and churches.

But what also stands out for me in this area is the friendliness of the locals. By the end of a winery visit, or the end of a meal at an osteria, you felt like you just made some lifelong friends.

“What I really like about the Langhe is that it’s not only about drinking great wines,” said my tour guide Sandro Minella. “Everyone leaves this area with great memories of the people they’ve met and with the wish of coming back!”

Sandro’s itinerary for me comprised not only visits to small wineries, but also a small cheese farm stuck on a hillside and a vertical tasting at one of the top Barolo producers.

A quick primer: Barolo and Barbaresco are both types of wines as well as small towns in Piedmont. The region around the towns is called Langhe.  The grape for both wines is Nebbiolo.

Barolo is southwest of Alba and the soil is full of clay and iron. The wines are big and structured and full of tannin. You can keep a Barolo for many years before you decide to actually open the bottle.

Barbaresco is northeast of Alba, its soil is rich with limestone and the wines are lighter and more elegant.  Both regions have strict rules for production, as you would expect. There are also wonderful Barberas, Dolcettos and a fabulous white wine, Arneis.  Also, there are bottles of “Nebbiolo delle Langhe” which are wines that were produced in the area but aren’t aged to the specs of the B’s.

A highlight for me, and there were many, was the visit to the winery of Renato Corino, in Barolo. It’s perched in the middle of rolling hills and grapevines, of course.  We walk in and Renato immediately apologizes because he doesn’t have bottles available for tasting. Instead, we did a barrel-tasting. We grabbed some glasses and went below to the cantina, with the tanks and the barrels and he poured from the spickets. Since wine that is still in the barrels is still aging, it was a treat – and a great wine lesson – to taste it that way.

Down below in the cantina. This was our last stop of the day.

Renato didn’t have any bottles handy so he treated us to a barrel tasting. This is outside the tank of a dolcetto.

Renato was the perfect host, going out of his way to make sure I tasted some of his best stuff. It worked. I bought two bottles at a wine store in nearby La Morra.

For the record, I do not consider myself an aficionado of Italian wines. I enjoy tasting different styles and learning about different grapes and regions. I firmly believe that wine is an integral part of a meal.

The itinerary for my three-day excursion was simple: Alba was my base and the first day was Barbaresco and the second and third were Barolo and all towns in between. Alba is the home of the white truffle, a specialty which sells for thousands of dollars at auctions. Fall is truffle harvest season. They grow underground in the woods. Hunters will take their dogs into the woods hoping to find a bounty. There are schools to train dogs to do this. “For the dogs, it’s all about the game,” Sandro said. “Find the truffle, get a treat.”

Other specialties are hazelnuts, grissini (long, thin, addictive breadsticks) and a local cheese called Toma, which brings us to our first stop.

Sandro set up an appointment at a farmhouse, actually the home of cheesemaker Silvio Pistone in an area called Benevello, in Alta Langa.  Attached to his home is a barn with “sheep of the Langhe,” or from the area.   Silvio took us on a quick tour, where I noticed an NCR cash register, dating back from who knows when. “I like to collect things,” he said. 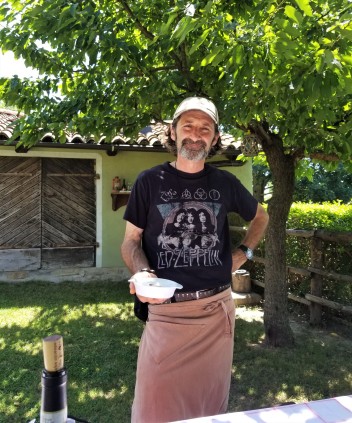 The cheesemaker himself, Silvio Pistone 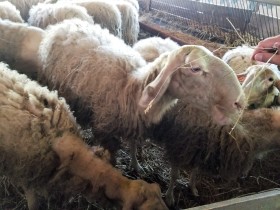 “Sheep of the Langhe” at Silvio Pistone’s cheese farm.

Silvio makes Toma for seven area restaurants and one in France. He also makes a type called giunca,’ a very fresh cheese that lasts just four days. We sat outside, under a shade tree, drinking Dolcetto, eating grissini, and tasting five different types of Toma, all aged for different periods and the giunca’.  We ended the meal with a taste of his hazelnut torte. Not a bad lunch!

From there, we headed to Barbaresco and our first stop was at the tasting room for the winery Rocche dei Barbari.  The owners Luca and Nicolas were welcoming and I even befriended their dog. You can only buy wines here, and you can only taste by appointment. 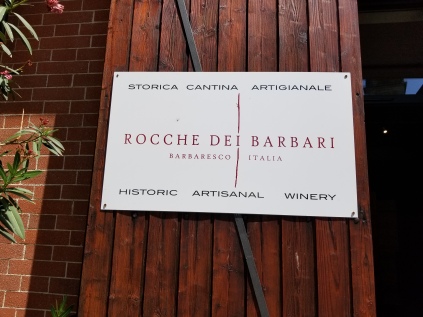 At the Rocche dei Barbari winery. 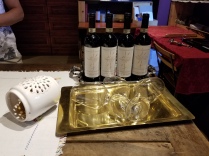 Our wines for the tasting at Rocche dei Barbari

This small exclusive winery had some big wonderful wines.

Our host Luca welcomed us with cheese and hazelnuts aplenty.

Next up, in the town of Neive, still in Barbaresco country, we headed to Cantina del Glicine, one of the oldest in the area. We visited the cellar below, dated 1582, and it was so nice and cool down there, I would have stayed for awhile. Did I mention the temperatures this weekend hovered in the mid-90s? 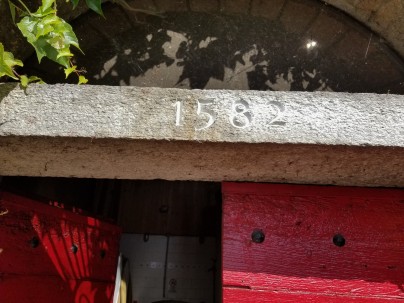 One of the oldest wineries in Barbaresco. This is above the entrance to the cantina

Inside the cantina. There was moss and a few mushrooms growing on the walls. 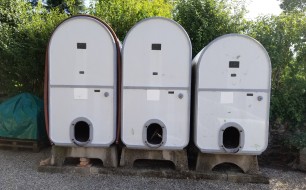 Some artwork inside the tasting room

This was also the first time I saw cement wine tanks. I had no idea such a thing existed and Sandro told me more vintners are starting to use them. Inside the cantina, there were algae and mushrooms growing on the walls. It’s so perfectly cool in there that, at one time, part of it was once used to store ice.

The wines were exceptional and this was the first time I tasted the white wine from the region, arneis. I also tasted a barbera, dolcetto and a nebbiolo d’Alba. Barbera is quickly becoming one of my favorite go-to reds. It goes with everything.

I was solo in Alba and so took it upon myself to do as the locals do and went to an osteria popular with them – Osteria dei Sognatori. There’s no menu. It’s one of those places where the staff tell you what they’re making that night and what would you like to try. I ordered a glass of vermentino wine and a dish of pasta. I was treated to a simple appetizer of Toma cheese and some shaved white truffles. After the pasta, since I didn’t want a second course, nor a side dish of  vegetables, I thought I’d just get some fresh fruit for dessert. Good luck.  Instead the owner brought me two tasting portions of the other two pastas they were serving. My dessert of fresh fruit came with a piece of tiramisu. (It was delicious) I spoke with the owner for a little bit, recounting my first day in wine country and bid my arrivederci.

The next day we hit Barolo, starting at the Grinzane Cavour castle. If you want to learn some history about Barolo and the region, start here. A movie plays inside that re-enacts how Camillo Benso, the Count of Cavour, was instrumental in introducing Barolo to the world. He would later become the first prime minister of Italy and a driving force in the unification of the country. Today, in several cities throughout Italy there is a Via Cavour, as an honor to him. 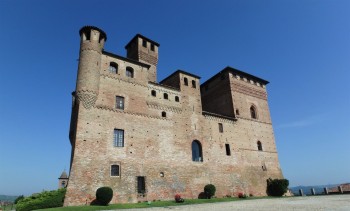 The Grinzane Cavour Castle. Inside is a museum about the Barolo and the wines and Camillo Benso, the Count of Cavour and Italy’s first prime minister. 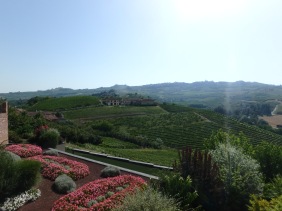 A view of the Barolo countryside

After the castle, we stopped at the winery Bric Cenciurio for a tasting and again, I enjoyed an arneis. I think it was 11 a.m. or something like that. Seemed like a good mid-morning snack to me.

First winery of the day! 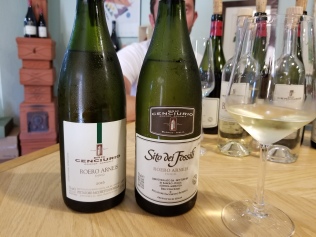 At the Bric Cenciurio winery. This is Arneis, a white wine from the region. This was also a mid-morning snack. There were grissini!

We ate lunch at La Cantinetta, a popular spot that Sandro frequents. No menu. We just ate small bites of local specialties, like vitello tonato, a veal dish with a tuna sauce, veal tartare (I was skeptical and it was delicious) and I ate a dish of ravioli del plin – they looked like ravioli but smaller and lighter. And wine, of course. 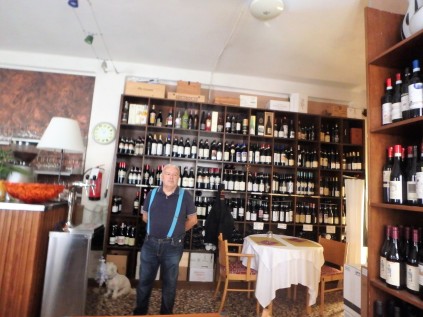 Our host at La Cantinetta for lunch 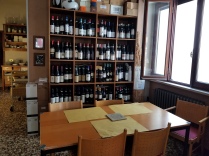 Lunch at La Cantinetta. No menu. We just sampled several small plates of their specialties, like vitello tonnato, veal tartare and ravioli del plin, which are small ravioli filled with veal or ricotta.

The owner of La Cantinetta has a thing for Batman posters. I love this.

So we walked out of there and enjoyed Barolo, the town, before heading to a vertical tasting at Borgogno. This is when you taste the same wine but from different years. I bought, ahem, a few bottles here too.

Then it was on to Renato Corini’s.

Back in Alba, I got carryout from this other great Osteria where the owner treated me to a glass of wine and told me how much he loves love New York City.

Two days down and I still wasn’t finished. My cousins Elena and Umberto came up on Sunday from Milan and we went to two more wineries, including the big Marchesi di Barolo, where you again can see the cement tanks as well as their original oak barrels. They treated me to lunch at a place called Locanda in Cannubi, out on a terrace where, of course, every view was, well, you know. That night in Milan, I was at their home for dinner. We ate pizza and drank beer and it was perfect. 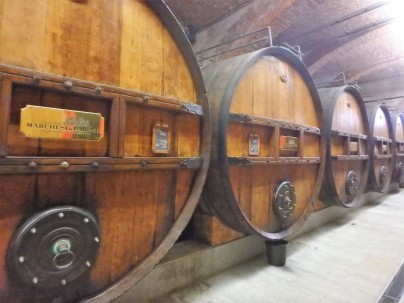 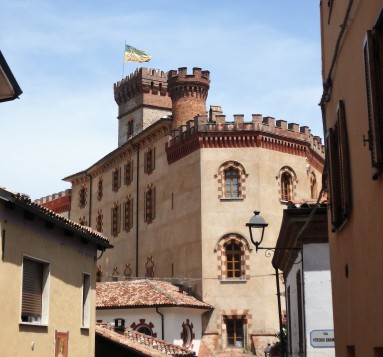 In the town of Barolo

Outside the Falletti Castle

Making grissini, on a 90-degree day. It was so hot. See the long breadsticks on the left? These are a local specialty. 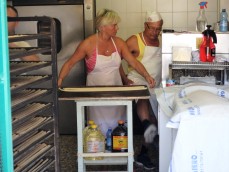 The grapevines of Fontana Fredda

Me and Sandro outside the Grinzane Cavour castle 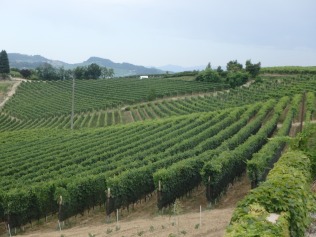 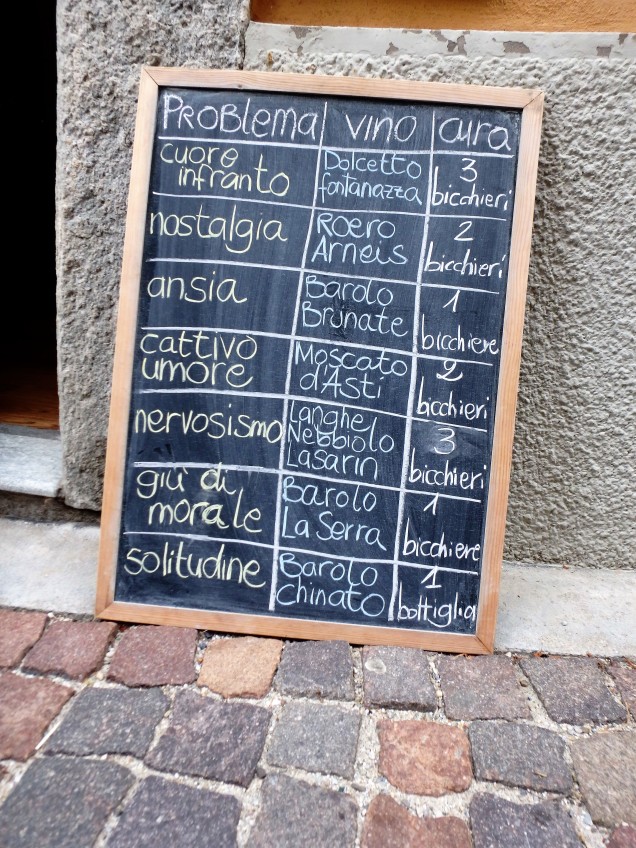 For your ailments, (the first column), they suggest the wine to drink and, in the third column, how many glasses it’s going to take. For example, if you have a broken heart, drink three glasse of dolcetto. Lonely? A glass of Barolo. 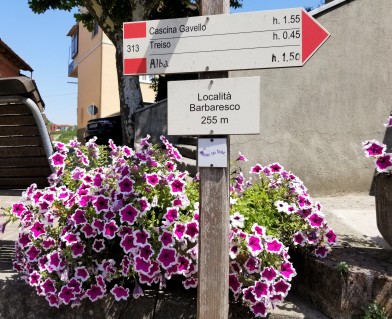 Entering the town of Barbaresco 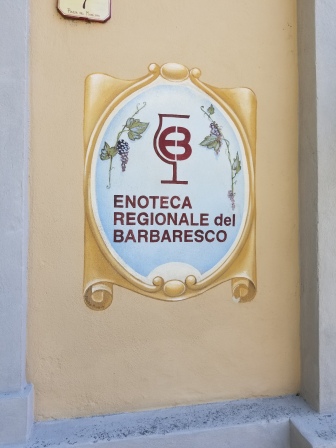 The Duomo of Alba, the Cathedral of San Lorenzo

The eagle, or Aquila in Italian

The bull on the facade of the Duomo

The lion on the facade of th Duomo

The angel on the facade of the Duomo. There are four statues on the facade – angel, lion, bull and eagle. (aquila in italian). Take the first letter of each: ALBA

Truffles for sale in an Alba specialty store

The lush countryside of the Langhe

The lush countryside of the Langhe

Grapes on the vine