Mauro Faleri was 18 years old the first time he participated in the “Passegiata storica,” the ceremony before the start of The Palio, the historic horse race held twice a year in Siena. He is a member of the Torre contrada, or neighborhood. “I was very proud,” he tells me. “It was fantastic. It was an honor to represent my contrada.”

For outsiders, it’s difficult to understand the passion, the lifelong dedication to a contrada that exists in Siena, and the importance of the Palio itself. You get a sense of it every July 2 and August 16, when the Palio is run. But it’s also a part of the very being of a Siena native, or Senese.

I was one of those outsiders during the six weeks I spent in Siena, studying at the Saena Iulia language school. I learned about the tradition, the rituals and which contrade are rivals. There are some people who will take a long way around to wherever they’re going just to avoid walking through a rival’s contrada. Or so I’ve heard. (I love that).

As a member of a contrada, Senese wear a fazzoletto (a scarf of their contrada) proudly around their shoulders during the days of the Palio and only if their contrada is in it. Those in the processions wave their flags with precision in every ceremony celebrating the contrade and the city. There are ceremonies throughout the year, as I witnessed on Dec. 1, the Feast of Sant’Ansano. (https://1cannolo2cannoli.org/2015/12/02/santansano-and-the-march-of-the-contrade/)

“The Palio offers a way to be part of the community. It’s a way to fill your life,” Mauro says.  Torre won the July 2 Palio last summer, the first time since 1896 that they’ve won the July race. A victory in the Palio is, indeed, very emotional. There’s no second or third place. It’s win or nothing.   “I’ve seen Italy win the World Cup . . . There’s nothing like the victory of your contrada in the Palio,” Mauro says.  “This year was special.”

Mauro recounts how, when Torre won, some people ran out of their homes to the Piazza and beyond for the celebration, which lasted several hours into the next morning. When they returned home, the doors were opened, the lights were on, everything was just as they left it. “If someone wanted to rob us, they could have robbed us, maybe had dinner” a friend told him.  Nothing was touched, in any home.  To me, that’s a sign of such respect among Senese of the Palio and a victorious contrada that something like that happens.

The last time Torre won was the August 16 race in 2005. Mauro waxes poetic about that day. “I couldn’t believe I was in the middle of this. I’d been dreaming of this, imagining this, to be here in the middle of all these people.”  The previous victory was also the August race in 1961.

Two of my fellow Saena Iulia students, Daniela and Thomas, were in Siena this summer for the July race and were with Mauro when Torre won.

“It was an extraordinary and gigantic spectacle,” Daniela says. While waiting for the race to start in the Piazza, she says you could just sense the emotion and the tension starting to build.  Everyone was feeling it.  And despite being in the packed Piazza with thousands of people, it wasn’t ever dangerous, she said.

Finally the horses were off and everyone started cheering. When Torre won, the contrada members, including our dear friend Mauro, started their raucous celebration immediately, jumping up and down, hooting and hollering, as one would expect. Think World Series Game 7, bottom of the ninth, two-out, game-winning hit.   “Madonna, these Senese are crazy!” Daniela says with a big smile. “But it was wonderful and I would like to go again.”

My Bolognese friends Paola and Luigi have seen the Palio a few times. One year, after watching the pageantry held before the race, they went into a bar in a nearby contrada to watch the race on television. And wouldn’t you know it: that contrada, Nicchio, won. “It was an explosion of joy,” Paola remembers. “People were crying, hugging.  We’re very lucky to have seen something like that.”

The Palio has been held twice a year since the 1600s in Piazza del Campo. Before then, it was held on other dates and the course went through the city. It started as a military exercise and has remained a tradition ever since. Ten of the 17 contrade participate in the race. The seven contrade that don’t participate in that year’s race compete automatically the next year. The remaining three spots are drawn by a lottery. Every year, there’s a contrada that will compete in both races or in neither.

The day of the race is a culmination of four days steeped in traditions, including the selection of the horse for each contrada, done by a drawing. The horses go through six trial runs in the Piazza, for practice, to get them used to the course, a steep and straight run with tricky curves.  The horses change speeds five times in one go-round.

The night before the race a big dinner is held in each contrada, with the rider, called a fantino, and the contrada officials sitting at a head table. There are toasts, speeches, songs – everything traditional to wish their rider and horse to victory.

The drappellone, also called “The Palio,” which hangs in the Torre’s church. This is the prize for winning the race. Torre won July 2, 2015.

On race day, it gets even better. In the early afternoon, a mass is held in the churches of every contrada. And they bring the horse.  The priest leads everyone in prayer, blesses the horse and ends with, “Go out and return victorious!”

In the Piazza, the ceremonial Passegiata storica begins when each contrada enters with selected members, like Mauro when he was 18, and they “perform” with their flags and drums and march around the Piazza.  This representation of the contrade is very important and a prize, called the Masgalano, is given to the one that does it best.

As race time nears, the contrade finally learn of the lineup. This is also done in a traditional way, by shaking upside down a silver container containing colorful balls representing each contrada. How they fall determines the order of the horses. The horses line up in front of a rope and the last contrada called is the one that determines when the race begins. And here’s how the fantino does it: there’s a boundary line behind the horses and when that rider’s horse’s nose crosses that boundary, the race begins. This process can take an hour or it can take a few minutes. But when it happens, they’re off in an instant. The race, three times around, takes about a minute, 15 seconds.

And it’s the horse that wins, with or without the rider.  And riderless horses have won a few times.  After the victory, you can expect celebrations for the next month, or two.  Mauro said while winning the Palio is certainly worthy of bragging rights, they don’t bring it up during the year. The reminders are in the contrade, on the streets with the flags and in the churches with the drappellone proudly displayed.

At present, I am observer of the Palio traditions but that’s going to change soon as I plan on being in the thick of things this summer. I want to live it. And so you’ll see me in the Piazza del Campo on July 2. And  July 1. And June 30. Maybe June 29.

I belong in Italy.

The scene: an empty Piazza del Campo. The Palio is run here, on the darker stones, in the foreground. The crowd, thousands-strong, stand in the middle to watch.

Thomas, Mauro and Daniela a few hours after Torre won, enjoying the celebration in the contrada. 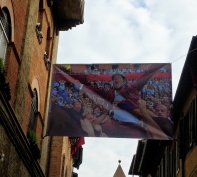 A poster of the Torre’s winning fantino from July 2 Palio right the moment of victory, strung across the street. How great is this?

The church of the Torre contrada. Torre’s colors are crimson with blue and white bands or stripes of various designs.

The wall in the Hall of Victories displays all the drappellone won by the Torre contrada. Twenty of them are from the 19th century. Torre have won 41 times since 1641.

These are the drappellone from when the Torre won both races, called a “cappotto,” or shutout. They are from 1787 and 1896.

Mauro inside the Hall of Victories. 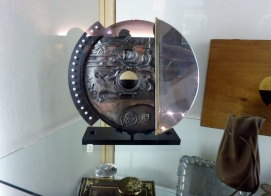 Il Masgalano, the prize given to the contrada that best represented themselves in Passegiata Storico before the start of the Palio. The artist/sculptor is Laura Brocchi, a Torre member and historian. She was also our guide through the church and museum.

A costume worn by members of the Torre contrada during the pageantry before the Palio. This spectacle takes on an air of the Renaissance with the participants not only wearing period costumes but they also have long hair, as most young boys did then. If they don’t have the locks, the contrada will give them a wig.

Jacket of the fantino, or rider, of the Torre, the contrada markers that are clipped to the horse bridles in case the rider falls off and the horse finishes and the whips, or nerbi, given to the rider. 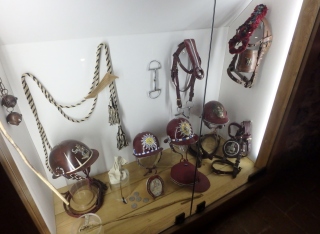 A display of hats and bridles of Torre riders, or fantini.

Costumes for the Passegiata Storica before the start of the Palio, 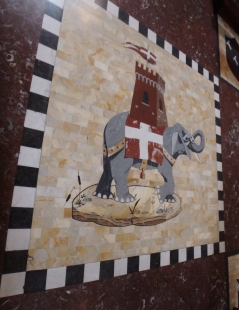 The symbol of the Torre contrada, an elephant, on the floor of the church.

A few doors down from the Torre church and museum is this sculpture at a fountain. The elephant is the symbol of the Torre.

Pride on display in the streets of the Torre contrada. This is the hat of the fantino, or rider, who won the July 2 Palio.

This is a picture of a poster I bought in Siena in 1986. 1986! I think this is a sign that I was always destined to return to Siena and see the Palio.