Ah, Bologna, the city of porticoes, prosciutto and Parmigiano.

My 2015 Italy adventure ended with five days in Bologna, a city I lived in for 18 months back in the mid-1990s. The city is known for its cuisine. In fact, every time I tell someone I lived there, the first thing they say is, “Ah yes. One eats well in Bologna.” Yes you do. And yes, I did.

Let’s discuss the food scene in Bologna for a minute.

In one part of the center of Bologna, there is a glut of shops selling prosciutto, Parmigiano Reggiano, tortellini, fresh fish, tortelloni, prosciutto, Parmigiano Reggiano, salumi, fruits and vegetables, chocolates and I’m sure I’m forgetting something. Oh yes, bread. These bakeries also cook up these crunchy, divine cracker-things called “strege.” Good luck only eating a few.

You simply do not see this concentration of food shops in other cities. Shank after shank of prosciutto line the ceilings of the salumerie. Stacks of cheese fill display cases.

Mounds of fresh-made tortellini and its big brother, tortelloni, remind you of the city’s signature dish.

Even the fruits and vegetables draw you in, with the displays of deep purple artichokes and eggplants, the fiery-red hot peppers and pyramids of bright oranges.

So yes, one eats well in Bologna and it’s a lot of fun to meander around these shops before deciding where to actually sit down and eat. This has been added since I lived here: tables. You can get plates of cheese and salumi by region, a piadina romagnola, (flatbread) or even some pizza. And wine of course. It’s crowded. It’s fun. It’s delicious.

My friend Paola and I found a great table outside a well-known cheese shop that now has table service and we indulged. After not seeing my Achilles heel, Parmigiano, on the menu, I asked for a side plate with a few pieces. There are just some things that must be done while in Bologna: drink Prosecco and eat Parmigiano.

But Bologna also has its share of must-see frescoes and sculptures. One of my favorites is a terracotta sculpture by Niccolo’ dell’Arca in the church of Santa Maria della Vita called “Compianto sul Cristo Morto” (Mourning over the dead Christ.)

There are six life-size figures standing around the body of Christ lying on the ground in front of them. But what takes your breath away is the detail in the faces of the figures and how they’re frozen in mid-movement. When you see the photos below, you’ll understand. Mary Magdalene, on one end, is screaming and it looks like she’s running toward Christ with her garments flying in the wind behind her.  There’s another figure, Mary of Salome’ whose hands on her legs look like she’s tearing at her skin. What makes it even more impressive is the fact that it’s done terracotta, not marble.

Paola explained that at that time, for these sculptors, marble was expensive to bring in from other places so they used the materials that were around them. In this case, it was argilla, or clay, and they turned it into the works we see today.  I saw two more terracotta works in Bologna by a sculptor named Alfonso Lombardi: another Compianto sul Cristo Morto and a wonderful piece with 15 statues by called “Transito delle Vergine.”

In the Basilica of San Petronio, I saw for the first time a chapel with a floor-to-ceiling fresco that showed heaven, purgatory and, if I may, a slightly disturbing depiction of hell as Dante described it in “Inferno.”  The other side depicted the story of the Magi, as in the three kings.

Bologna also has an expansive main square, Piazza Maggiore, where the basilica is, but also a few government buildings and the fountain with a statue of Neptune. I was there the week between Christmas and New Year’s. The city’s Christmas tree was striking next to Neptune.

Bologna is also known for its porticoes. The last statistic I read said the city has 38 kilometers of porticoes and you want to be under them when it’s raining or to get some respite from the summer humidity.

It was fun being back in Bologna for a few days, reliving those delicious memories of the city’s central market, when I learned the difference between tortellini and tortelloni, how mortadella is actually called “bologna” in some towns, that prosciutto from Parma and Parmigiano Reggiano from an zone outside of Parma are the jewels of the kingdom and yes, one really does eat well in Bologna. 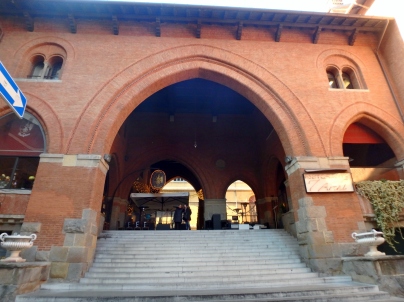 There’s some prosciutto for sale.

Then again, how about some prosciutto or capicola.

Pancetta, salumi, mortadella. They’ve got it all. 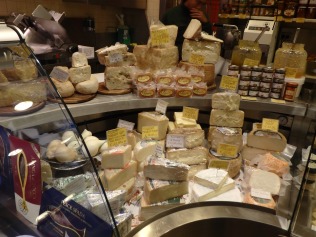 Cheese. How about some cheese.

Just a few forms of Parmigiano Reggiano at La Baita, a well-known cheese shop in town, which is where we ate lunch.

Inside La Baita, where we ate lunch. (Can you blame us?)

Fresh fish among the plethora of pork

Tortellini’s big brother tortelloni. These are filled with ricotta. And they are very very good.

Oranges – both navels and mandarins. So sweet you can eat them like candy.

These little crackers are called taralli. They are addicting. I’m just warning you now. 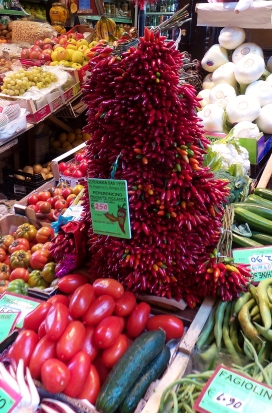 Pepperoncini, tomatoes. I love the colors.

Lunch at La Baita. My friend Paola and me. and Prosecco, because it’s the law. 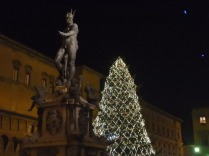 The Neptune fountain in Piazza Maggiore next to Bologna’s beautiful Christmas treet.

One of my favorite sculptures in Bologna. “Compianto sul Cristo Morto” (Mourning of the dead Christ) by Niccolo’ dell’Arca. It’s even more impressive because it’s done in terracotta.

Mary Magdalene, right, and Mary of Cleofa. Note: the expressions on their faces and how their garments are frozen frozen in movement. You can’t look away. 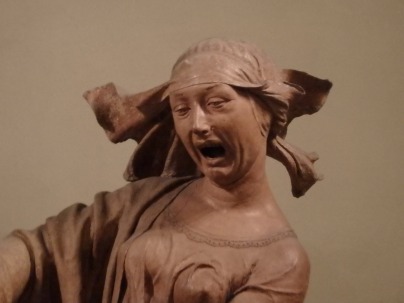 Maria of Salome’. Look at her hands. She’s almost tearing at the skin on her legs.

4 thoughts on “In Bologna. Prosciutto, Parmigiano and Terracotta”