I’m not sure you can eat any better in Bologna than how I did for a few days at the end of December but I did find a way: I ate tortelloni that was made at home. And I made it! OK, I didn’t make all of it. I made some of it. Sort of.

I asked the mother of my friend Paola if we could once again make tortelloni in her home. We did it the first time in 1996, when I was living in Bologna. I was Paola’s roommate and her mother, Maria, lives one floor down. It was my idea then and now. And, just like 20 years ago, Maria schooled everybody on how it’s done.

Maria, 88, has been making pasta at home her whole life. You will not find a machine in here. We’re all about the rolling pin.

First, we made the filling. Fresh ricotta, parsley, salt and freshly grated nutmeg. I actually grated the nut for this.  Who does that?

Then the real work started. I have no idea how much flour we used. Maria sort of eyed it when she poured it out of the bag and made a little mountain. Then she made a well with her knuckles, kept the sides high and added five eggs.  “I was making this before I was married,” she says as she scrambled the eggs in the well.

Then you start to add the flour into the eggs, it gets gooey, then thick, and then it’s dough. Punch, roll, knead, punch, roll, knead the ball. Then it was time for the rolling pin.

Maria can wield a mean rolling pin. In fact, she ran rings around me with that thing. The goal is to roll out the dough as wide as the board but you have to make sure it’s even all around and not too thin in the middle. If you watch the video, you will see that I failed this part of the lesson.

Maria was very patient on the sidelines when she encouraged me to hurry because if the pasta gets too dry, it’s difficult to roll out. At one point she basically said, “Here, let me do it,” and had the pasta rolled out to the width of the board in about five minutes. How’s that for humbling?

Once the dough was rolled out, Maria cut it into big squares and then each got a dollop of the filling. Here was the other fun part: forming the actual thing around your finger. You have to close the square so it’s a triangle. Then, you wrap it around your finger, connect those ends and somehow fold the top corner out as you do. Or something like that. I did not do too well in this part of the lesson either. Maria  made about 20 a minute. It was all I could do to get one finished that didn’t look like it was run over by a truck.

We made about three dozen and put them in the freezer until lunch the next day.

Remember one thing about preparing filled pasta: the flavor comes from the filling. That’s why we ate ours with a simple tomato sauce, with parmigiano reggiano sprinkled on top.  You can also eat them with just butter and sage, a popular dish in nearby Parma. But they’re called “tortelli” in Parma and they look like ravioli. Got that?

It was easy to spot which tortelloni were mine. They were just a tad misshapen. But they were still good!

What a great way to start the new year: wine, cheese, and homemade tortelloni in Bologna. Buon appetito! 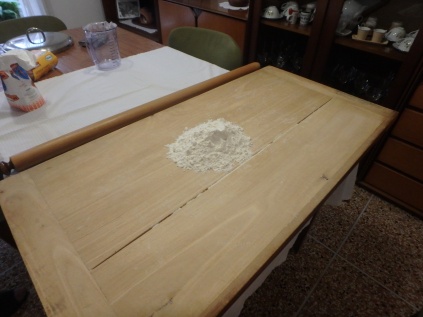 The scene is set: the board, the rolling pin and the mound of flour.

Maria beats the eggs in the middle of the flour mound.

After beating the eggs, you mix them in with the flour. The gooey consistency turns into a ball of dough. That metal scrapes the bits.

I jump in and knead the dough. Maria stood patiently and watched … 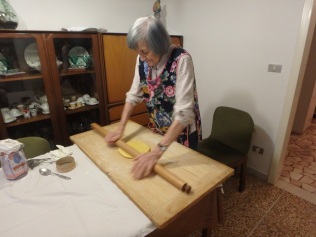 And then we bring out the rolling pin. Maria rolls out the dough with such ease and speed.

My turn. I’m not nearly as productive as my mentor standing next to me. I last about one minute before relinquishing the pin.

Maria with speed and agility, gets the dough to the width of the board in about five minutes. I’m kind of just standing and watching

Yes, we took a break for a selfie, of course.

Maria continues to spread out the dough. She’s a pro. The bowl with the ricotta filling is the foreground.

Each square gets a dollop of ricotta filling.

A pan of Maria’s perfect tortelloni. There’s a talent to getting these things right.

OK, which one is mine? Yes, that sad thing on the left.

And lunch is served. Notice we only added a simple tomato sauce. Don’t let the sauce overwhelm a filled pasta. The flavor comes from the filling.

5 thoughts on “The Pasta Lesson”