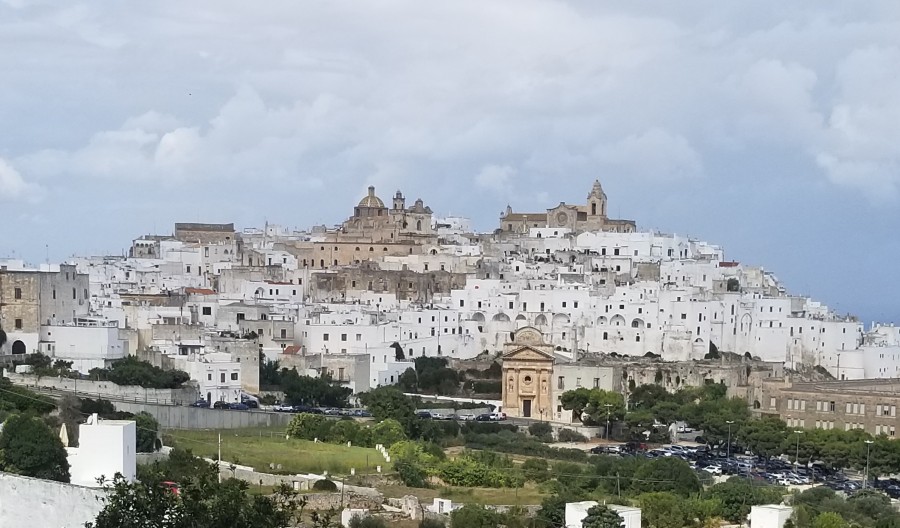 Day four was a spectacular day, from start to finish. We had a 40-mile ride ahead of us, plus an optional 14 mile-loop down to the seaside and back, which required going up a big hill.

We were going to Ostuni, another one of Italy’s beautiful white-washed towns perched on a hill. This was also a day with the most hills to date. They weren’t steep, but they were long. The coffee stop, 10 miles out, was in a little town called San Michele Salentino. 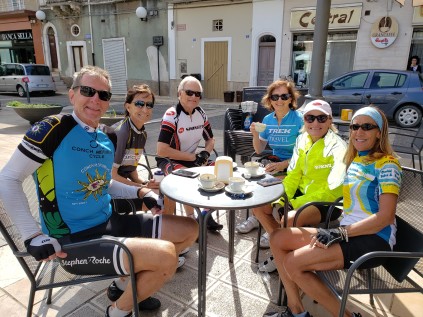 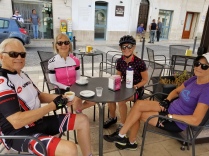 On the way to Ostuni. We stopped at San Michele Salentino. That’s Tom, Jennifer, Lesley and Chris, 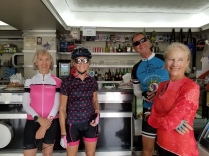 Lovely piazza, as usual, and we sat outside at a table with our cups of espresso and cappuccini. There was a gentleman sitting on a bench nearby and, as usual, I decided to chat with him. He was wearing a neck brace and I was just curious. He was very nice and asked me about our adventure. (And the neck brace was from an injury to his spine, just in case you’re curious)

So then we were off! Ten more miles to Ostuni and I would have to decide if I wanted to do that extra loop. When we stopped at the spot for the fabulous view, I was in awe at the beauty of the town. Beautiful is an understatement. We took all sorts of photos from every angle, more than a few selfies and it was just amazing. 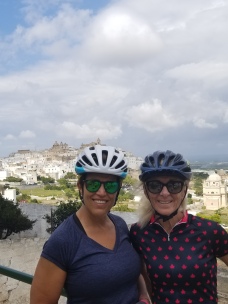 That’s me and Lesley 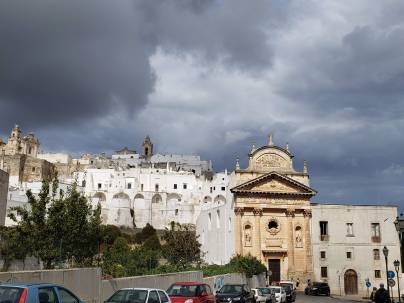 Gorgeous against the sky (photo by Melanie F)

Cristiano asked me one more time – am I doing the loop? The first part wouldn’t be a problem since it was downhill and then then flat to the sea. It was that second part, the going back up, that gave me pause. After much consternation and a few quad stretches, I decided to do it.

Only five us of went, and of course I was in the back by myself most of the time but so what.  The scenery was exceptional. We’d seen plenty of olive trees but the trees here were something out of Harry Potter movie: big, thick trunks that looked like legs that were about to start moving. With white Ostuni behind me, the blue Adriatic sea ahead and these trees on red earth to the right and left, it was a pretty great scenic ride. 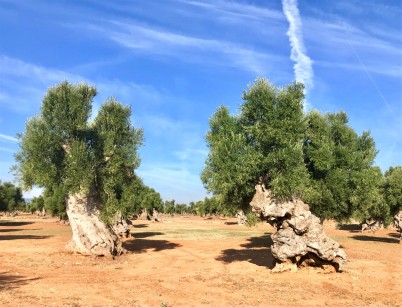 These trees are hundreds of years old. We passed them on the loop down to the seaside. (Photo by Cristiano Bonino) 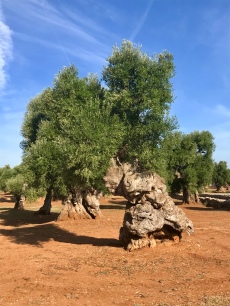 Olive trees, hundreds o years old, outside of Ostuni, on the way to the seaside. (Photo by Cristiano Bonino)

Then it was time to head back up. I took my time, shifting into low gear, then another low gear and then, finally, I’m on the lowest possible gears, moving my legs quickly but the bike seemed to move in inches.  Cristiano came alongside and cheered me on (see the video, right at the start of the climb). I finally made it back to the van and got some cheers from Mindy and Stephanie. I applaud them and Steve and Tom because they likely just killed the climb. I’ll get there one day.

Ostuni was charming, stunning, magical. There were ancient ruins in the main square, of course, and the steep streets and white buildings made it almost surreal place to visit. Sure, it’s a heavy tourist area, for good reason! 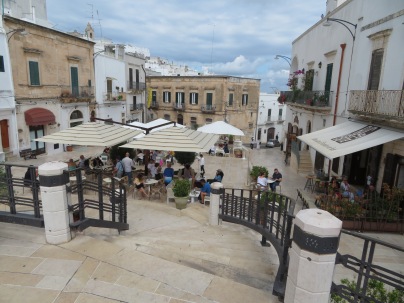 The view looking down 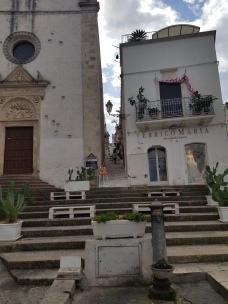 And the column of St. Orontius, who is known as the first bishop of Lecce. (Photo by Melanie F) 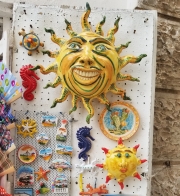 Can you imagine having that big sun hanging in your home somewhere? Kind of scary.

So we headed back to the hotel and I just enjoyed the whole ride back, among more beautiful olive trees. Total miles: 55.

The evening program turned out to be as exceptional as the day was. Cristiano would only say that he had a surprise planned. We watched a mozzarella-making demonstration before dinner, as we sipped sparkling wine and munched on (yes!) taralli.  Then we sat down to dinner at this elegant table and enjoyed pasta with swordfish sauce or tomato, basil and cacio cheese or grilled salmon, or king prawns, or a pork filet. 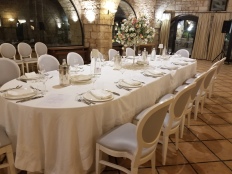 What a beautiful table. I felt like we were at a wedding.

We enjoyed a mozzarella-making demo before dinner. That’s our guide Suzie on the right. (photo by Melanie F)

We had a mozzarella-making demo before our fabulous dinner at the hotel. (Photo by Melanie F)

Finally, the surprise: two musicians set up in the corner – one playing a large tambourine and the other on the accordion. We were going to listen to traditional Pugliese folk songs. And then the dancers appeared.

They were dancing the Pizzica, a folk dance from Puglia. We watched as the two dancers, Mina and Fabrizio, moved ever so close to each other but they never touch. He may take her scarf but they never touch. They explained how the dances tell a story, usually about courtship. Then it was our turn. One by one, we joined them until we were all out there in a circle, doing the Pizzica!  If you’ve got four minutes, watch the posted video of Mina and Fabrizio. 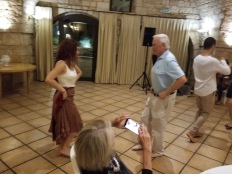 Tom learning the Pizzica from Mina.

Steve gets a lesson from Mina, in red, and Julie tears it up with Fabrizio

Laurie and Jennifer doing the Pizzica

It was a great evening and a great way to end such a fabulous day.

Next: Day 5 – Locorotondo, Alberobello and the Trulli!