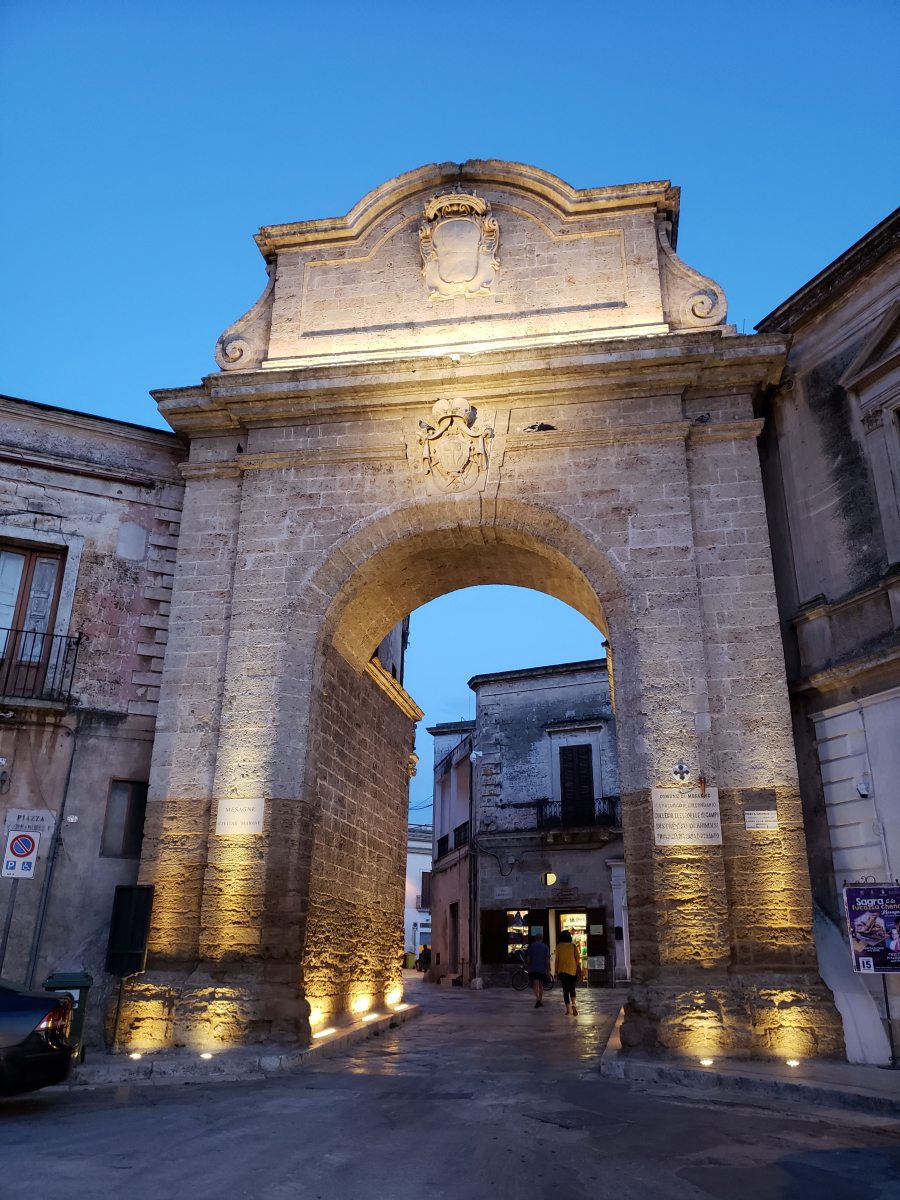 The third day of the bicycle trip took us out of the Salento region of Puglia, the southern end of Italy’s boot, and to the town of Mesagne, in the province of Brindisi.

I looked forward to discovering the town. The itinerary for the day was a 41-mile ride just short of the town, where we could get in the van for another 12 miles or ride those last miles to the hotel. But in the middle of all of that was our usual coffee stop and then lunch at a winery. That’s right. Lunch at a winery. I have to say I was a bit skeptical of this plan because I happen to like wine with lunch, especially when I’m lunching in Italy. And I’ve never done so in the middle of a 53-mile bike ride.

The winery is in Salice Salentino, one of the more well-known wine regions of Puglia. “Americans tend to make a quick stop and eat a Cliff Bar. Instead, we like to stop and enjoy a lunch, maybe taste something you wouldn’t taste somewhere else. This is part of the trip,” Cristiano said.

So we were off! First was our coffee stop in a small town, San Pietro in Lama.

And this is when I learned something else about cycling: the thrill of riding into a headwind. Wow. There were times when I wasn’t sure I was even moving forward it was so strong. We were on this open stretch of highway and it just hit us head-on. I was pedaling so hard it felt like I was going up a steep hill. “That’s cycling,” Cristiano said. “You deal with the elements.”

As we got closer to the town, I started looking for a big majestic winery with the wrought iron gates and rows of grape vines. And once again, the three of us – me, Melanie and Chris – were in the back and following the Garmin, through a turn here, another one there. And then we followed it right out of town. “I think we missed it,” I told Melanie. Then Cristiano appeared on a bike to bring us back around. We missed one turn that would have brought us to the winery, which was not on some open plush grounds but was in a building in the center of town.

Welcome to Leone de Castris winery, founded in 1665. We enjoyed a tour and then ended with a delicious buffet lunch in the wine museum, tasting three of the wines. Their rose’, called The Five Roses, was the first-ever Italian rose’, first bottled in 1943 and sold in the U.S. 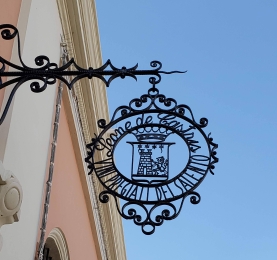 Leone de Castris winery, where we stopped for lunch and a tour 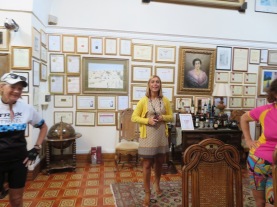 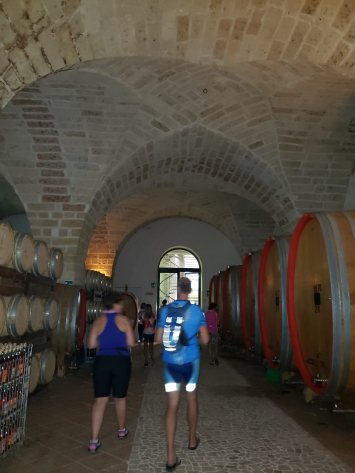 Me and Steve walking among the barrels 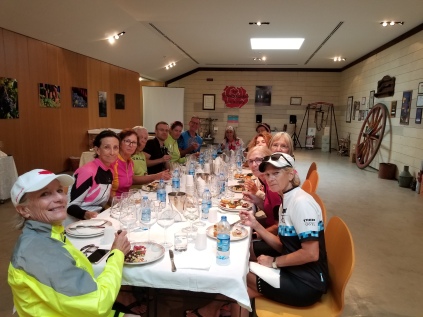 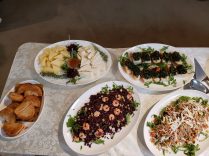 Shrimp, farro, cheeses, you get it, 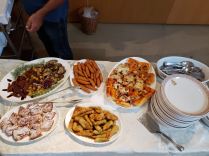 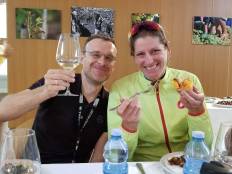 This was a delicious Salice Salentino we tasted at our lunch at the Leone De Castris winery. (Photo by Melanie F)

We started with the white wine

This was the first Italian rose’ bottled and sold in Italy. The story goes that the name comes from generations of Leone de Castris family members always had five children and the name was born.

Then we were back on the road and I opted to ride the whole way to the hotel instead of hopping in the van, at the 41-mile mark. After the madness of getting in and around the winery, it was a pretty straightforward ride, again accompanied by olive trees and grape vines, to our next hotel/masseria, Tenuta Moreno. https://www.tenutamoreno.it/

We headed into Mesagne that evening and were on our own for dinner. Chris and I decided to opt out of Pugliese cuisine for one night and get pizza and beer, while every body else headed to different restaurants. 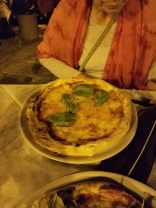 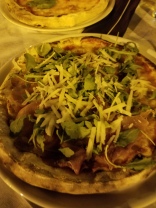 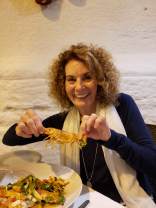 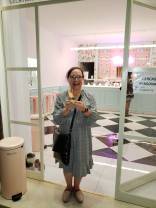 We all ended up at the same gelateria at the end of the evening. Looks good Melanie!

I chatted up the owner of the pizzeria, Pietro Biscosi, and learned that he is the youngest of five children and they all have restaurants in town. 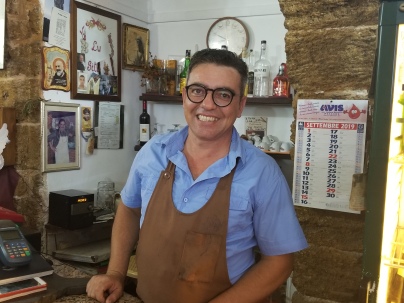 Pietro Biscosi, the owner of the pizzeria. He is the youngest of five children from Mesagne and they all have restaurants in town. He treated us to the house desert bocc o’notti, a tart with apricot filling. 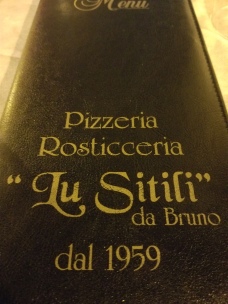 And then we all ended the day enjoying some gelato. It was another great day. 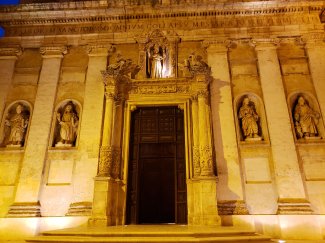 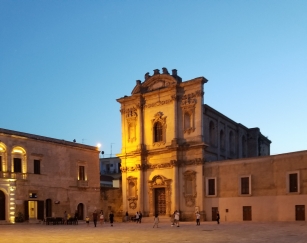 In the wine museum: 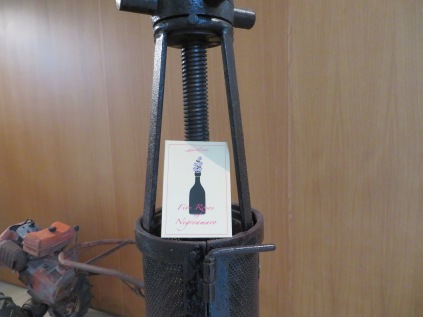 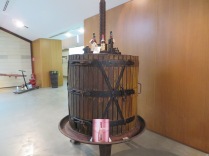 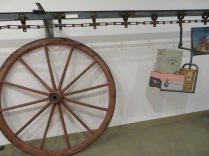 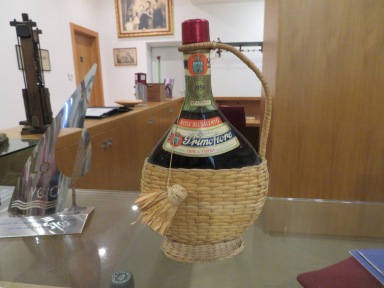 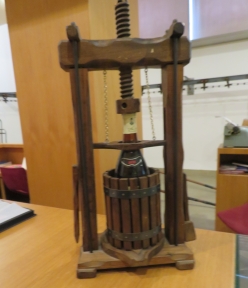 Old way of putting in the cork

In the pizzeria, where Pietro displays the cucuzze (dialect for squash) from his garden. 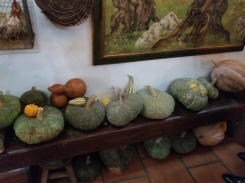 These are squash and pumpkins from the garden of the pizzeria owner. They’re on display inside the pizzeria.

It’s quite a long pumpkin, but it’s a pumpkin, from the garden, hanging inside the pizzeria. 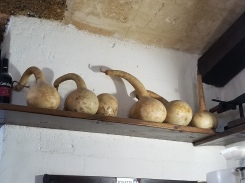 but in the local dialect, they’re called cucuzze.

Next: Day 4 – Ostuni, one of Italy’s “most beautiful villages” and a 14-mile loop down to the seaside and back (read: big hill!) And we learn a traditional dance.

One thought on “Cycling in Puglia Day 3: Mesagne and a winery visit”