I spent my second day in Umbria in the ancient city of Spoleto, home of the famous “Festival of Two Worlds,” an annual music/arts festival that starts at the end of June and runs 17 days. The festival showcases music, ballet, opera, plays and exhibitions. The final gala concert takes place in the piazza in front of Spoleto’s Duomo. (See photo above)

When I was planning this trip, I wasn’t sure how easy, or not, it would be to travel around Umbria without a car. I’m glad I took the advice of local guide Anne Robichaud who said to make Assisi my base. There are plenty of trains and buses out of Assisi that will get you all over the region.

My friend Paola arrived easily via train on a sunny day in late March. We had to walk a bit to get to the walkway and escalators to take us to the historic center. There are a few different routes you can take once you’re way up there and they’re all clearly marked.

The first thing I wanted to do was walk across the massive Bridge of Two Towers. It stands 90 meters high and is 236 meters long and has ten arches. It joins Spoleto, on the hill of Saint Elia and a hill called Monteluco. across the ravine.

The Bridge of Towers – there are 10 arches and it stands 96 meters high over the ravine.

Another view of the Bridge of Two Towers

Heading toward the Bridge of Two Towers

Well, that plan fizzled as soon as we saw that it was closed off for pedestrians. The reason was safety. After the earthquakes in the area, it’s staying closed until further notice.

One thing I was looking forward to: walking across this bridge. It was closed as a precaution. The recent earthquakes were felt here.

What can you do? It was still a beautiful day in Spoleto

But the view of the bridge, from either side and from above, was spectacular. In fact, it’s so impressive that the German writer Wolfgang Goethe wrote about it in his “Viaggio in Italia” (trip to Italy). There is a plaque at the bridge which commemorates his journey through the city.

On the way back to the center, we stopped to get a coffee and the barista, Emiliano, said even though the path across is blocked off, go ahead and walk across it anyway. “No one is watching.” I asked him if, when I’m arrested, it would be OK to give the officers his name. I think he said something like, “Non ti preoccupare.” (don’t worry).

This is Emiliano, a barista near the Bridge of Two Towers. He suggested I just walk across the bridge anyway. Everybody does. I declined. 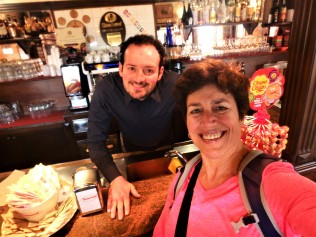 Emiliano and me. He explained that the Bridge of Two Towers is closed to pedestrians as a precaution. The recent earthquakes were felt in Spoleto.

We headed into town and I could not believe how quiet it was. There was no crowd anywhere, including at the Duomo, Santa Maria Assunta. The view of the church from a distance was beautiful. Here we had a tower, a portico with arches and a façade with rose windows, all in front of a big wide open space, the piazza where the aforementioned concert is held in July.

Inside the church are frescoes by Filippo Lippi and a chapel with frescoes by Pinturicchio. There is also a letter written by St. Francis of Assisi to a close friend and follower Brother Leo. It’s dated around 1225. It was all kind of incredible to soak in. 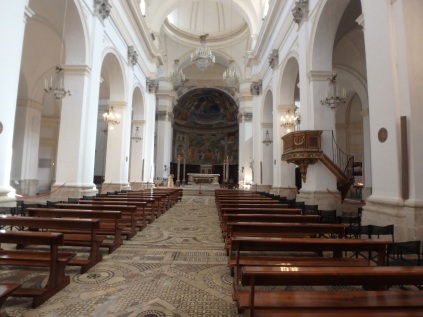 Inside the duomo of Spoleto, Santa Maria Assunta. The apse and walls around the altar are covered with frescoes by Filippo Lippi and depict episodes from the Virgin Mary’s life.

The Annuniciation, by Filippo Lippi

The Nativity by Filippo Lippi 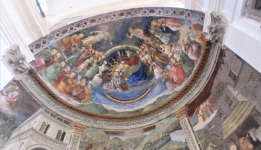 “The Coronation of the Virgin” on the apse ceiling in the Duomo, by Filippo Lippi

Chapel of San Leonardo, with works by Pinturcchio

This is a letter from St. Francis of Assisi to Brother Leo, one of his closest followers, dated around 800 years ago. It is housed in a chapel in the Duomo. It’s about a conversation the two had on the road. It ends with: “And if you need and want to come to me for the sake of your soul or for some consolation, Leo, come.”

And this painting. I love when artists do this.

One good piece of advice Emiliano gave us was to eat lunch at his family’s osteria, “Osteria Al Bacco Felice.” We ate in the dining room full of vintage posters from the early days of the Spoleto festival. And we were the only ones there. According to our waitress Sara, the city was empty because people are afraid of earthquakes. This area was near where the earthquakes hit this year and last. “Usually at this time there are certainly more people here,” Sara said. They’ll likely have a crowd in the summer for the music festival but she thinks they won’t have much until then.

My friend Paola inside the osteria. The wall was covered with posters, some decades old, of the famous Spoleto music festival. 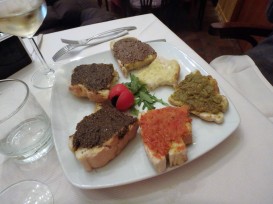 Some bruschetta for lunch. And wine, of course.

Spoleto Festival poster inside the restaurant.

We went back to the fortress, La Rocca Abornoziana, which dates back to the 14th century. There were interesting frescoes inside and a great view of the bridge and the Umbrian countryside. (While I was looking down on the bridge, I saw two people coming back from the other side. I started to consider what Emiliano said until I saw two other people walking toward them. They were police officers. I’d say I made the right choice.)

A view of the Bridge of Two Towers from above, in the Rocca, or Fortress.

The view of Spoleto from the fortress, La Rocca Albornoziana.

Inside the “Painted Room.”

The “Painted Room” inside the fortress, which was built in 1359–1370 by the architect Matteo Gattapone of Gubbio for Cardinal Albornoz. This room is covered in 15th-century frescoes, or what’s left of them. 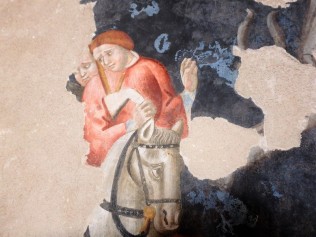 Close-up in the “Painted Room.”

Then we walked back into the city, taking all sorts of twists and turns on the cobblestone streets to get to the Roman amphitheater. They hold concerts there to this day.

The Roman ampitheater, built in the early years of the Roman empire. It is now used for concerts and other cultural events. 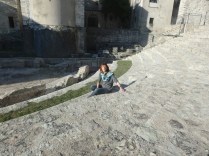 My friend Paola sitting in the Roman ampitheater

Sitting in the Roman ampitheater. Yes, that’s me.

A view of the stage inside the Roman ampitheater.

We walked back to the train station via a few different streets, a part of Spoleto that was very much not historic, full of trendy shops and lots of people. It was almost like being in another city.  When we got back to Assisi, we took the bus up the hill and saw the St. Francis Basilica all lit up. Again, a pretty spectacular sight. We hopped off and walked up the hill (you’re always walking up a hill in Assisi) and took lots of photos.  It was a good way to end the day. 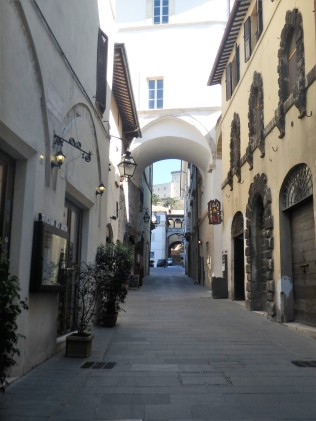 Street in Spoleto. We owned the town. Street were empty. 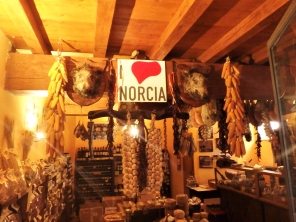 Inside a salumeria where the owner was from Norcia, a town hit by an earthquake in October 2016. He lamented that the government wasn’t doing much to restore the town.

The salumeria owner, who was from Norcia. He told us about the recovery efforts, or lack thereof, in the town. He’s holding up coglioni del mulo. It’s a type of salami that gets its name from its shape: mule’s balls. (!) 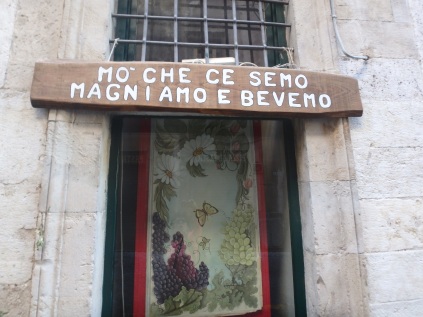 Looking up from the Piazza del Duomo.

In the Piazza del Duomo, looking away from the church. The final concert of the “Festival of Two Worlds” is held here. The festival showcases international stars in ballet, opera, music and plays. It was started in 1958. 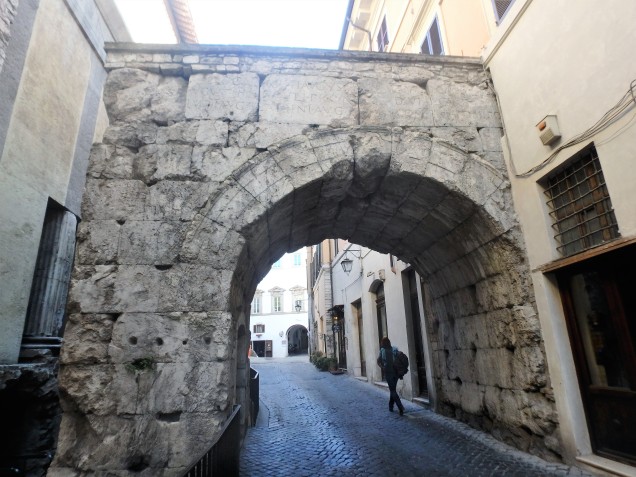 The Arch of Drusus, built around 23 AD as a gateway to the Roman forum.

3 thoughts on “A Day in Spoleto”