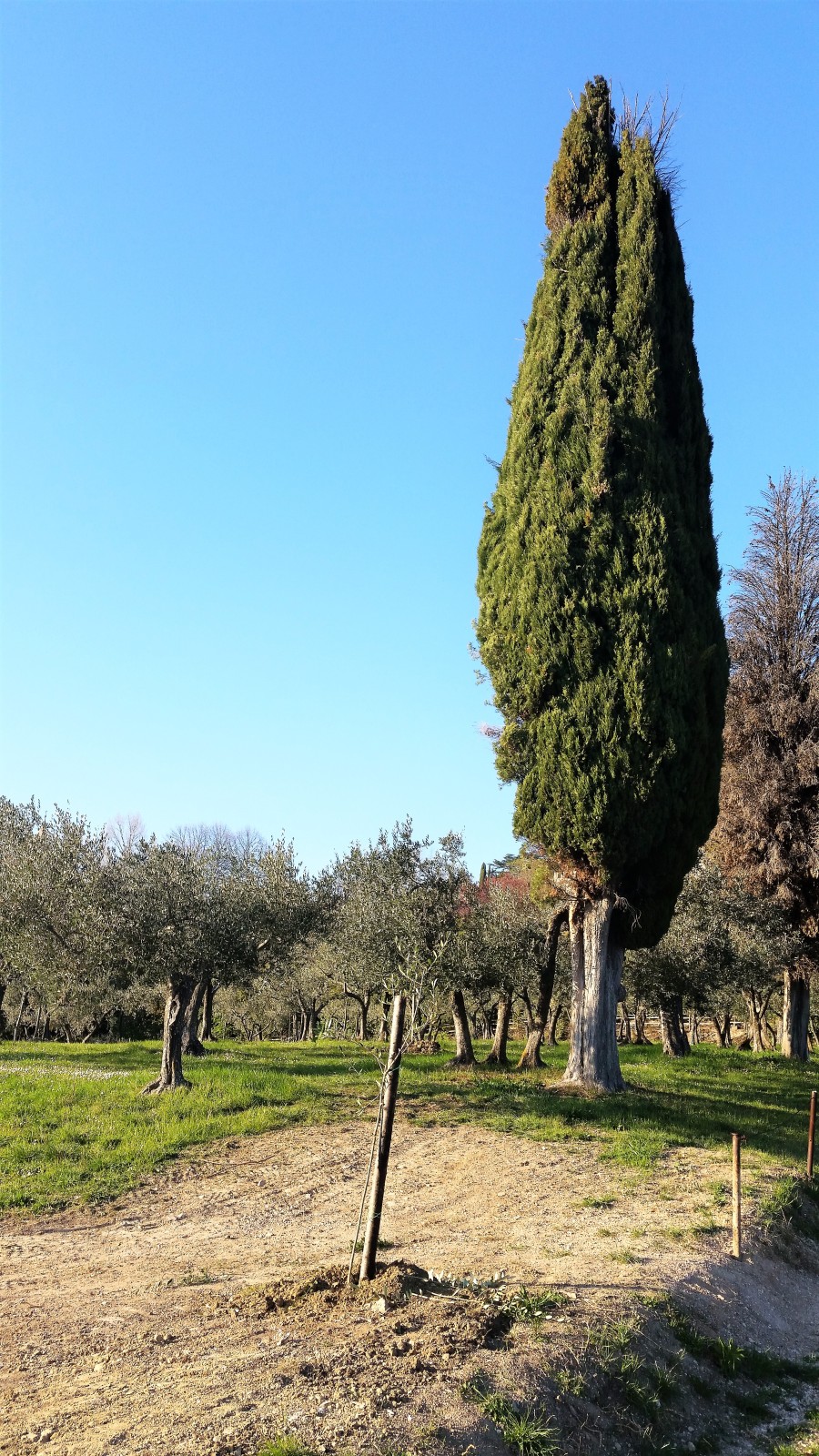 Day one of discovering the hilltowns of Umbria started in the plain at the bottom of the hill looking up at Assisi. There sits the seventh largest Christian church, Santa Maria degli Angeli (Santa Maria of the Angels). I’ve been to a few basilicas in my day but there was something different here. Inside, under the dome, is another church, called the Porziuncola. It’s literally a tiny church, where St. Francis founded the Franciscan Order.   The Benedictine Monks gave the structure to him and then the basilica was built around it. Taking photos was not permitted so instead, take a look at the Wikipedia entry for it. You really need to see it.  https://en.wikipedia.org/wiki/Papal_Basilica_of_Saint_Mary_of_the_Angels_in_Assisi

Also in the church is a Cappella del Transito – the Transit Chapel – where St. Francis is said to have died. Outside the complex is a rose garden where St. Francis rolled in a rose bush to fight off temptation and when he did, the thorns disappeared.  Today there is a patch of rose bushes with no thorns.  The whole complex – the basilica, the small church, the chapel – stuck with me. For me, it was  unusual to see a small church inside a basilica. But for the people around me, praying on bended knee, it was something different. It made me think about my mom, when we were in Assisi together. It made me think about a lot of things. It made me forget about the politics noise I left back home.  It was just for a few moments but I was reflective in there. I was in awe.

So that was our morning. The rest of the day took on a slightly less reverential theme: wine tasting and eating!  Our guide Anne took us to nearby Spello, a wonderful Medieval hill town southeast of Assisi.  This place holds an olive oil and bruschetta celebration in early December, called the “Festa dell’olivo e Sagra della Bruschetta.” Read about it here on Anne’s web site: http://www.annesitaly.com/blog/spello-celebrates-its-gold/

We tasted wines accompanied by a five-course lunch at Enoteca Properzio, which was featured in the New York Times’ travel section in 2014. The lunch started with something simple: bruschetta drenched in their fabulous olive oil. For the next  two hours, we tasted a variety of wines and ate lasagna, soup, salad and a dessert. 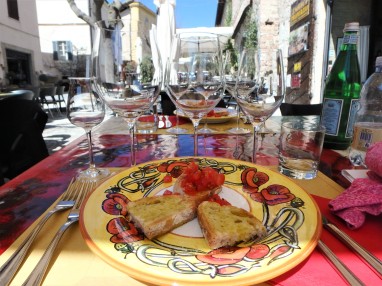 At Enoteca Properzio, we tasted a “few” wines, accompanied by delicious courses like bruschetta, lasagna, soup, salad and a dessert.

At Enoteca Properzio, these three women were sitting at the table next to us. We started a conversation and learned they’re from Forli’, a small town outside Bologna. I said “Oh, I’ve been there.” And they were a bit shocked. I was there one evening to attend a Rotary meeting, as part of my Rotary International Scholarship. Small world. 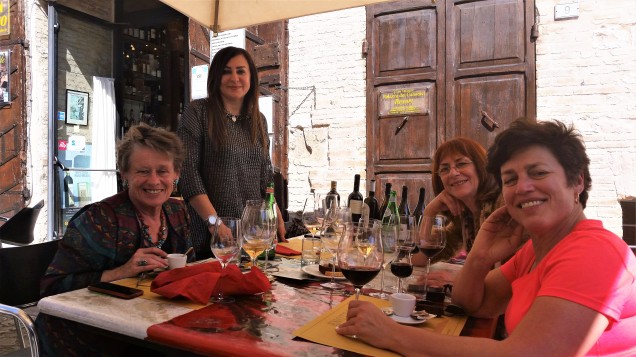 The lunch crowd in Spello at Enoteca Properzio. That’s Anne, Camelia, my friend Paola and me. We had wines to taste with an accompanying course and it was all very very good.

Then it was time to walk. So Paola and I ventured forth into the heart of Spello, which basically, like every other town in Umbria, had a main street that was just one long ascent. But every turn, every side street, every “vicolo” provided a view, worth a click of my camera. 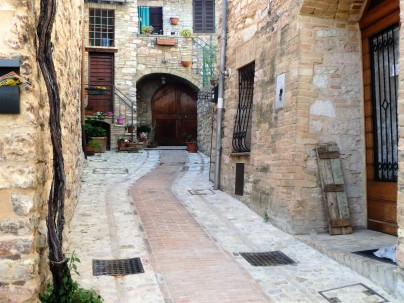 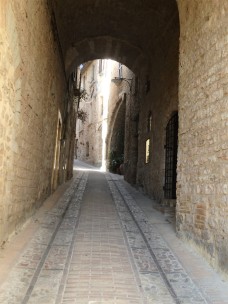 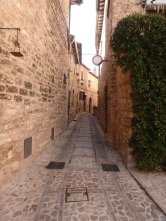 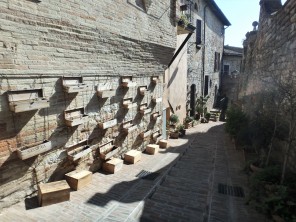 Side street in Spello. Those are wine bottle boxes used as planters. 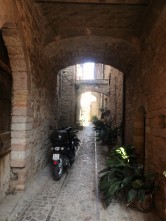 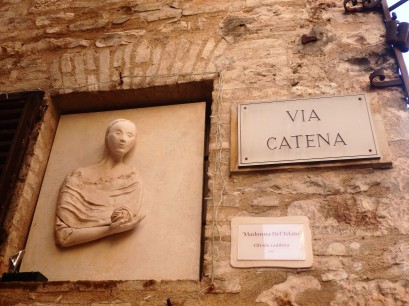 This is a terracotta sculpture by artist Elfrida Gubbini, called “La Madonna Del Telaio.” She made it for Paola Tacconi, who owns the clothing store, La Bottega degli Intrecci. The name means “Madonna of the Loom” and is on the wall outside of the shop. 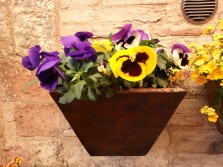 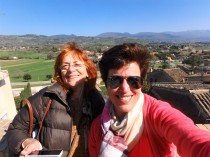 At the top of the hill in Spello, with the Umbrian countryside behind us. 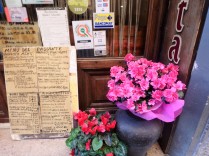 Outside a restaurant. The red flowers on the left are Ciclamini. The pink flowers are azaleas. 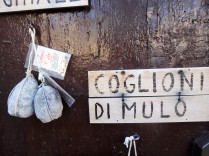 We reached the top, admired the Umbrian countryside behind us and the fortress in front of us covered up in scaffolding for renovation.

We walked back down and went to the church of Santa Maria Maggiore. Inside there are the works of artist Pinturicchio, in the Baglioni Chapel. Sorry – no photos!

On our way back to Assisi, Anne dropped us off at the Sanctuary of San Damiano. From there, it was only a 300-meter walk uphill to the center of Assisi. 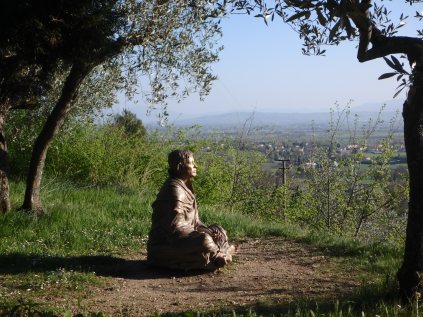 A bronze St. Francis, on the way up to Assisi. 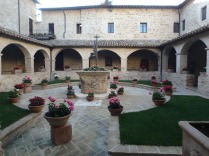 Inside the sanctuary of San Damiano, where St. Clare and her followers founded the convent in which St. Francis wrote his “Canticle of the Creatures.” 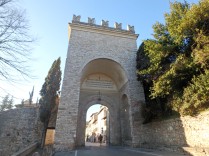 After a 300-meter climb, we reached Porta Nuova, of the gates into Assisi.

I’d been in Italy for 24 hours and I’d already seen masterpieces, reverential chapels and churches and walked up enough hills and steep streets to offset any brioche and cappuccino from the morning.  I knew it was going to be a good week. Next up: Spoleto.

2 thoughts on “Around Assisi and a visit to Spello”