After studying Italian in Italy last year, one of the first things I did when I returned home was seek out ways to maintain my progress. I continued the lessons with the school in Italy via Skype, but I also returned to the Italian language school here in Cincinnati, School Amici.

The two hours a week at the school with the native Italian instructors encompassed grammar and fun conversation. I needed both as I continue my quest to keep improving and eventually, maybe, hopefully, get close to fluency. But I was curious about why other students were there.

Why were they studying this most beautiful language?  I found varied reasons but a few in common: a desire to learn their family’s native tongue, wanting to speak with the locals during an upcoming trip to Italy or a reconnection to ancestors.

“It’s a good way to keep in touch with my heritage in the middle of Germany here on the Ohio River,” said my fellow student Louis Solimine.  He’s originally from Brooklyn but has been in Cincinnati for 35 years.

Solimine, fellow students Eric Lombardo, Dominic Lemma and Michael Trotta have been studying Italian together for eight years at School Amici.  All four have family roots in Italy.

Lombardo said after studying the language and then going to Italy makes a difference in the experience. “I knew how to say things,” he said. “It adds a whole extra dimension to being there if you can speak the language. It’s a whole other layer of culture.”

Trotta wants to learn to speak the perfect Italian, since he grew up speaking and hearing the language spoken with a dialect. “It’s a whole different mindset when I’m there,” he said. “You get gun shy about not speaking correctly but you have to get over that. I can get by day to day but it’s the longer conversations that are difficult.”

Student Sue Zurface, a cyclist, attends classes so she can converse with her fellow bike riders when she returns to Italy for races. During a trip in 2014, she became fast friends with the owners and mechanics of a bike shop and went on a ride with one of the mechanics. He spoke no English, she spoke no Italian. “Our communication consisted of horrific attempts at each other’s mother tongue and a lot of hand signals,” she wrote in an e-mail.

She found School Amici in an Internet search and quickly advanced in the second level class. Her plan to return to Italy that fall hit a snag when she began treatment for stage III leukemia.  She went anyway, armed with the ability to converse at a basic level on most topics. “By the end of the week, the language no longer seemed foreign to me,” she said.

Zurface has since been back twice to Italy, once to ride in the “Gran Fondo” race in the city of Cassino.  She’s still fighting the leukemia battle, she says, but she’s on a “good path.” Soon she hopes to go back and visit Calabria, the region of her roots.

School Amici was founded in 1984 by Federico Bilotti.  “I decided that the time was appropriate to provide the Cincinnati community with the opportunity to experience the Italian culture,” he wrote me in an e-mail.  Bilotti now lives in Aprilia, Italy, a small town in the Lazio region. He wrote that the idea for a school was born from second-generation Italians who wanted to get closer to their cultural roots.

Current school director Michele Alonzo, who’s been with the school for 25 years, the last 18 as director, said it’s rewarding to still see so much interest in Italian. “Italian is not an international language. It’s not something you can speak everywhere you go, but it’s still one of the most fascinating ways of communicating.”

Some of the more common reasons students enroll in the classes are the pleasure of learning a new language and for travel, if they’re planning a trip to Italy.  “They want to learn more than ‘Buongiorno’ ‘Come stai?’,” Alonzo said. “They like to participate and when they’re there, they want to show interest in the language.”

Today the enrollment averages 40 students, divided in four levels from Beginning to Advanced. The two-hour classes are held once a week at the Academy of World Languages in O’Bryonville for ten weeks. 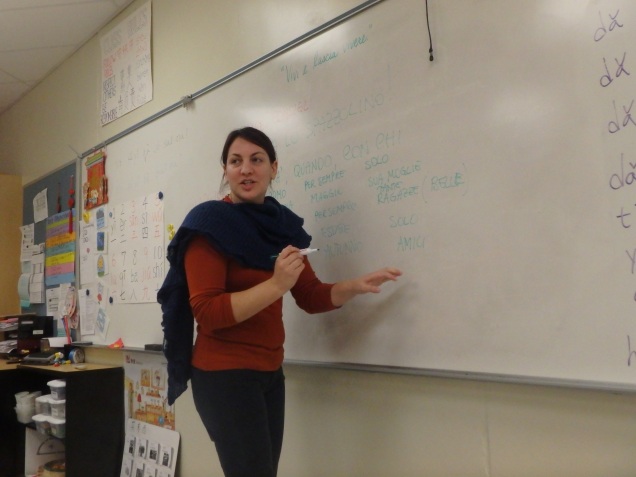 Instructor Valeria di Cristofaro during a lesson. She never speaks English during classes.

Instructor Valeria Di Cristofaro told me how much teaching here and sharing her experiences from home helped her deal with homesickness.  “When I came here, I was far from my family, my home in Italy. The students helped to take away some of the nostalgia I was feeling.”

There are several students with family origins from Italy and they enroll in the school to reconnect with those roots.  “The students want to go there and discover where their ancestors came from,” Alonzo said. There are others who want to get acquainted with the language before they get to Italy and have to communicate with locals in a small town, where nobody speaks English.

And of course, there are some who like to learn Italian because of what the language and the country still represent to people.  “The dream to live la dolce vita,” Alonzo said. “They really feel like Italians have the best life in the world. The food, the weather, the art, panoramic views. They think about the paradise of Italy.” He continued, “Learning the language helps them feel a little bit more Italian. They feel a part of that world.”

School Amici has relationships with “sister schools” in Italy, in Siena, Sorrento, Todi and Recanati.  If you really want to speak with the locals, get a basis here in Cincinnati and then go to Italy and enroll for a week. You can’t do much worse than living in the middle of Tuscany or on the seaside of Sorrento for a vacation.

I think Trotta has the right idea: he wants to just go rent a house in a small town in Italy, where no one speaks English and live there for six months. Sounds like a pretty good plan to me! Andiamo!

Want to learn Italian? The next session starts Wednesday, September 28. Go to http://www.schoolamici.com for information.  The school is donating 10 percent of class fees to the Italian Red Cross Relief Fund for the victims of the earthquake that struck Italy on August 24.

Student Sue Zurface during a bike ride in Italy.

Students at School Amici after a lesson last spring. The school teaches all levels, from Beginner to Advanced.