In the midst of all the pizza-eating and enjoying the sights and sounds of the streets of Naples, we took a rather calm approach to my last day in town and visited a Villa and church/monastery complex way up the hill looking out on Naples. The city is full of so many Baroque masterpieces. I’m lucky in that I’ve seen a lot of them during my other visits to the city.

This time, to add to the extraordinary things I’d already seen during the past three days, I saw a villa where, once we were inside, a pianist happened to sit down at the piano on display and treat us to a few minutes of her fine talent. It didn’t matter that the piano was out of tune. She was exceptional. Turns out, she was in town to appear at the Teatro San Carlo. We were just lucky enough to be there at the same time.

Right after, we ate lunch at what is known as the “best pizzeria in town” 50KALO. In my opinion, it must be pretty darn good to be called “the best” in Naples. And it was.

After lunch, we drove up to the Vomero neighborhood way up on the hill overlooking Naples and visited the San Martino Church and attached monastery and Bourbon Naval museum. It was a nice way to end my sightseeing of Naples. Antonio and Gina were the perfect hosts and guides and I look forward to getting back there and discovering so much more.

By all means, put Naples on your list of “Cities in Italy I must see.” 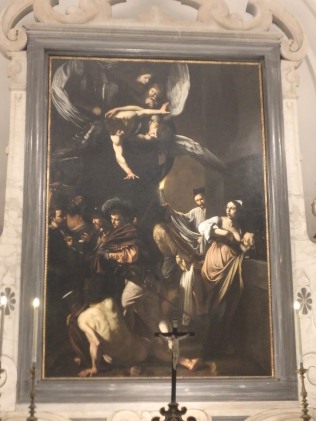 Caravaggio – “The Seven Works of Mercy” (1607) inside the Pio Monte Delle Misericordia Church. 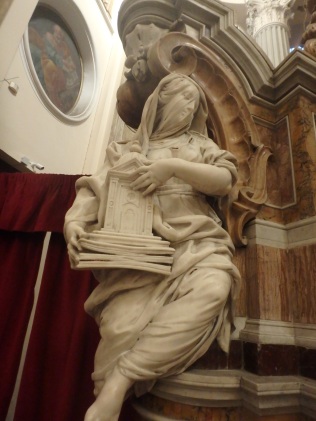 “Allegory of Church” by Angelo Viva, inside the San Giorgio Maggiore Church. How real does that veil look over her face? 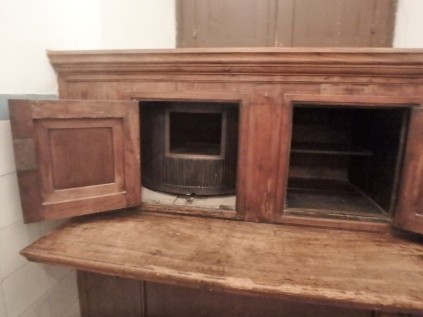 A ruota, or wheel, at the Basilica of Santissima Annunziata Maggiore, a complex which includes a children’s hospital. When families were too poor to care for babies or they were illegitimate they placed their baby in a cylindrical drum and then the wheel turned and the baby was taken out on the other side by the nurses. The hospital kept a record of the babies they received. Read more here: http://www.comune.napoli.it/flex/cm/pages/ServeBLOB.php/L/EN/IDPagina/1418?uniq=181957ed0f3906a8723d634a50d11671 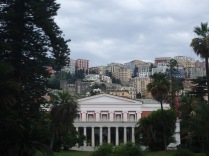 A view of the Vomero district, a wealthy area of Naples. In front is the Villa Pignatelli, now a museum, once the home of Diego Aragona Pignatelli Cortes. 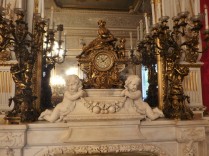 Inside the Villa Pignatelli, the mantle piece above the fireplace.

A desk inside the villa.

Ornate marble and ironwork on the staircase inside the villa 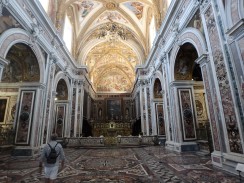 Way up above the city, above the Vomero district, is the Church of San Martino, a former monastery complex and a castle, Castle Sant’Elmo.

One of the chapels in the church

The inlaid marble floor by Cosimo Fanzago inside the San Martino Church. 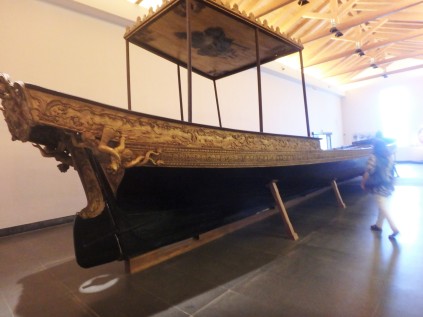 Part of the San Martino complex is a Bourbon naval museum. 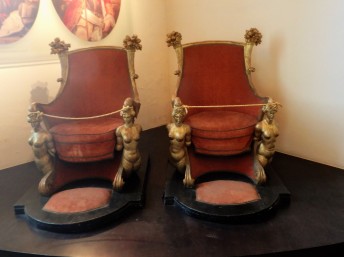 Seats for the royalty on the barges/ships

Detail of one of the barges

Inside the complex, which was once a monastery. This is a cemetery. What gave it away? 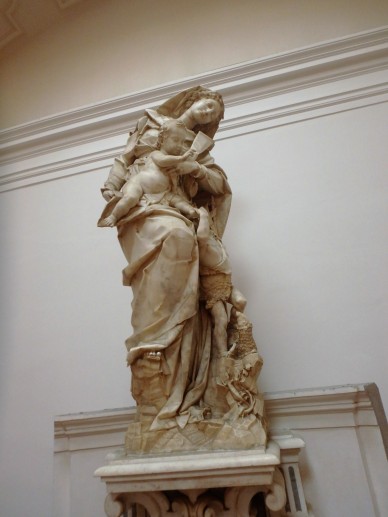 My dear friends Antonio and Gina

Inside the museum. Kind of an optical illusion, no?

The view of Mt Vesuvius fromup above

2 thoughts on “Naples: A Villa, a Church, Pizza”