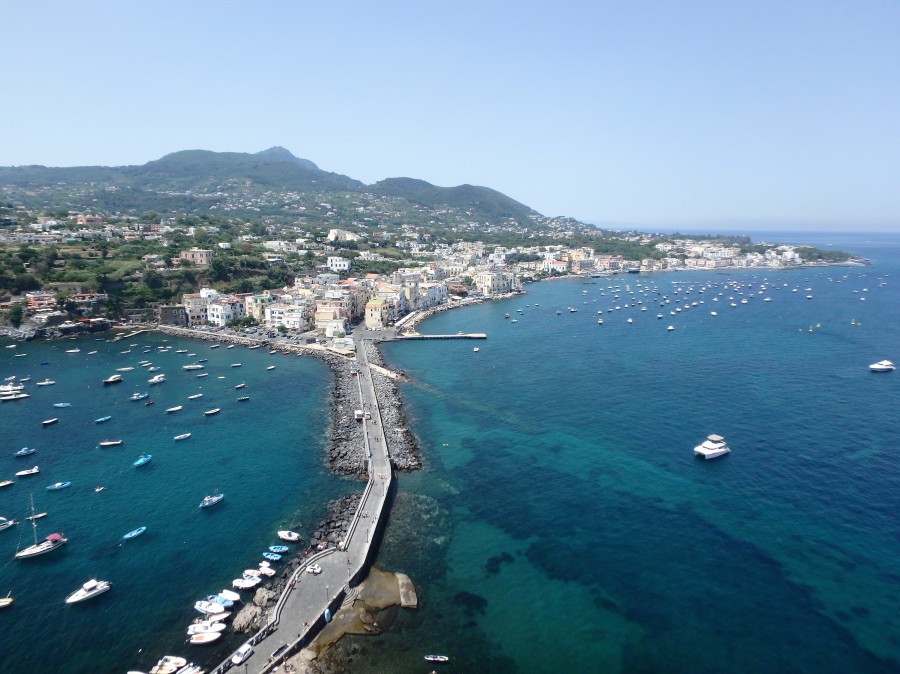 When I asked my friend Antonio if we could spend a day on the island of Ischia, he graciously agreed and planned the whole day to make sure we saw the highlights. Ischia is an island off the coast of Naples and it takes about 45 minutes to get there by a ferry. Everybody else at the port that morning was going to Capri so it won’t be that crowded, I thought.

Turns out, Ischia is quite the playground not only for tourists but for Italians, for Neapolitans, for long stays in the summer. It’s tough to enjoy all of it in one day, as you’re waiting for buses and then it’s time for lunch and you walk a little more and it’s hot. But we did it.

It was a beautiful day. It was a hot day. I can’t thank Antonio and Gina enough for taking a whole day to show me the island. Gina used to spend a few weeks here every summer when she was a teenager.

Ischia also happens to be part of the Elena Ferrante Neapolitan novels, which I love, as you all know by now. It’s first a place where Elena goes for the summer with a family to watch their young girls. Later, she’s there again with the family and best friend Lila. The girls spend time on the beach, reading and discussing life, among other exploits.

The port at Naples was filled with tourists like myself heading out for the day or the weekend, a lot of them going to Capri. I’m not quite sure what I was expecting on Ischia. I’ve lived in Florida so I guess I was expecting a big beach town-like atmosphere with lots of restaurants and shops. There was plenty of that . . . plus a Medieval fortress. That was different. 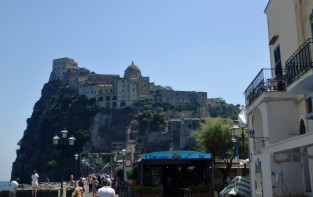 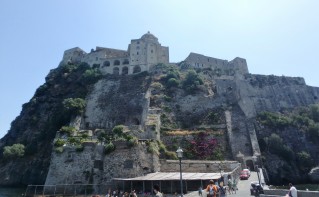 Walking up to the Aragonese Castle.

The way to get around the island, if your car isn’t there, is by scooter, bike or bus. We got away from the port at Casamicciola (I love to say that name) and landed on a shopping street, much quieter. Then we headed to the Castle Aragonese, where, as it happens, Antonio and Gina and their nephew Lorenzo, had never been either.  So it was a new adventure for all four of us. The castle was built in 474 b.c. as a fortress. Its walls and churches were built between the 14th and 17th centuries. It’s connected to Ischia via a cement bridge.  The views from up top are spectacular.

We ate lunch at a restaurant at one end of the bridge, right on the water, with a perfect panorama. We drank the local white wine, Biancolella. Antonio ate a plate of fish from the local fishermen, called frittura di paranza, that I wholeheartedly declined tasting. I ate clams and spaghetti and a pasta dish reminiscent of Sicily with eggplant, tomatoes and mozzarella. 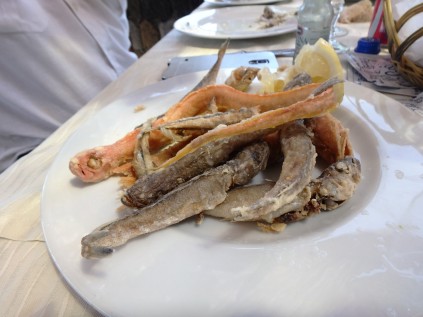 This was Antonio’s second course, all fish caught locally. It’s called frittura di paranza. He asked if I wanted to taste it. I politely declined. 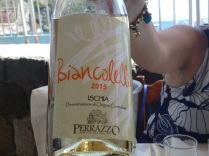 The white wine of the island. Yes, it’s delicious and quite refreshing. 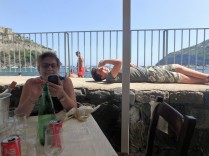 Lorenzo has the right idea here. How about a “reposo” after lunch, while Gina checks messages.

After a hike to Sant’Angelo, a ritzy, chic part of the island, we trekked back up the hill to head home. Lorenzo and I saw the bus at the stop and asked the driver to please wait 10 seconds so Antonio and Gina could get on. He did, but not without drama of course, and then we realized after all the hurrying, we got on the wrong bus. So we got off, waited, got on the right one and headed back to Casamicciola. And I bought a beach bag and a tank top. It was nice to sit in the air-conditioned ferry and relax on the way back to Naples. 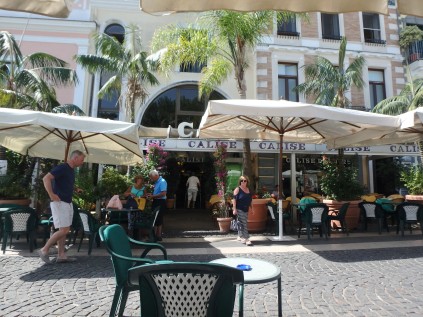 The famous cafe Calise. And they make delectable croissants. 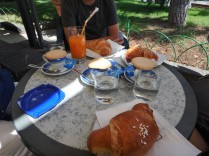 And we ate those crossaints for breakfast. Note the presentation of the coffee – with a cookie on top. 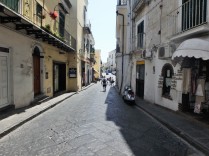 A street on Ischia, away from the port. Lots of cute stores, restaurants. 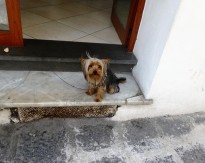 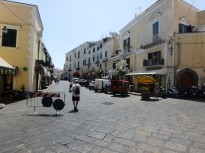 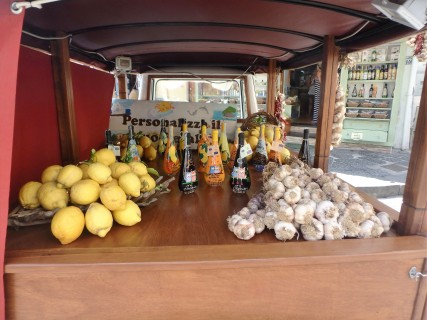 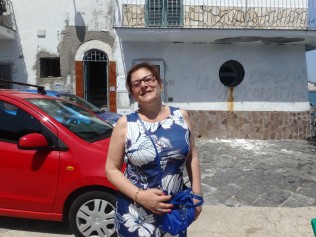 Gina while we walked through an area where she used to go for several summers when she was a teen. 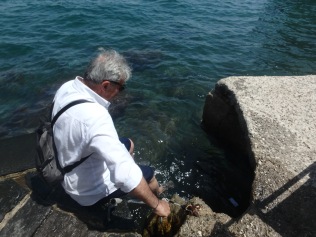 Antonio tests the water. It was a very warm day. 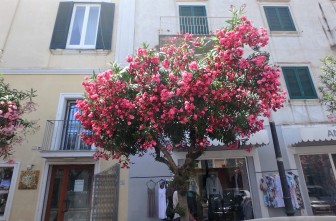 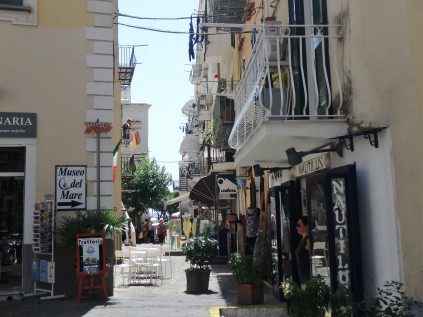 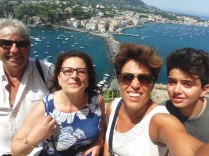 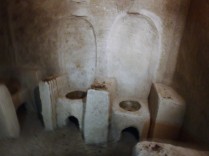 This was a crypt, believe it or not. When the kings died, they’d take their bodies and put them down here, fully dressed, on these throwns. Yes, the holes are for the fluids as the bodies decomposed. 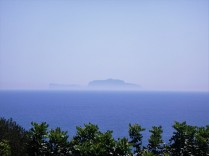 Capri in the distance. 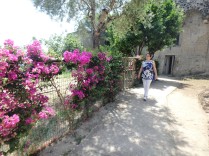 Gina along the path inside the Castle. 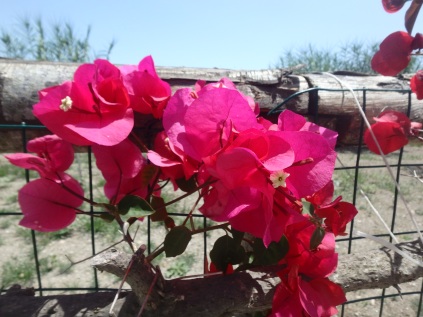 Beautiful flowers inside the Castle grounds 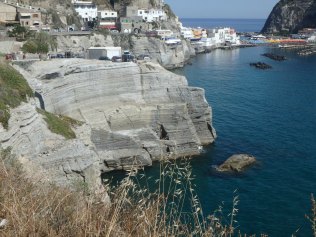 On the way to Sant’Angelo 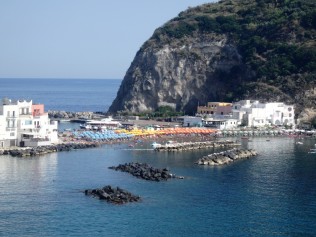 Me on the way to Sant’Angelo. How about that background? 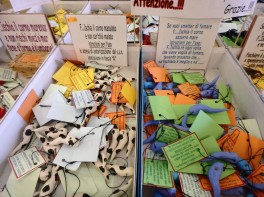 Whistles of Ischia. There is a whistle to free you from bad luck. Because on Ischia, “si mangia, si beve e si fishia” (you eat, you drink and you whistle.) With a whistle from Ischia. 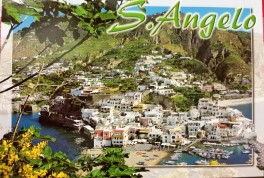 Another view of Sant-Angelo. On a postcard. 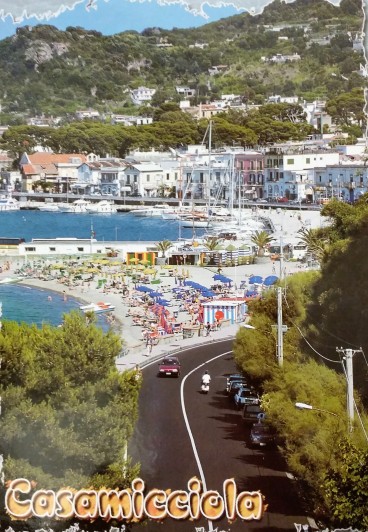 A postcard. I took a photo of a postcard of Casamicciola. Say it with me: “Ca-sa-meech-ee-o-lah” Then run the “ee” and “o” together. “Ca-sa-meech-eeo-lah” 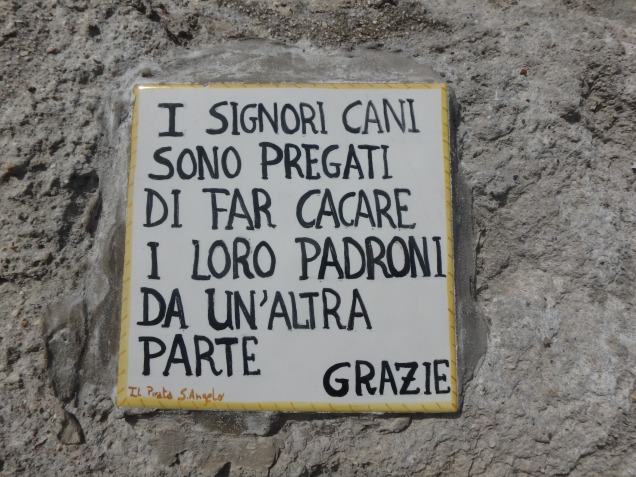 The patrons of Sant’Angelo are making a request of dog owners. I’ll just leave it at that.

One thought on “A Day on Ischia”