My Unicorn contrada guide Fabio has seen eight Palio victories for the Unicorn. Two of those, 1983 and 2001, the horse won without the jockey. Remember, with the Palio, it’s all about the horse.

Then Fabio reminded me of something. At the horse blessing, before the race, the priest doesn’t look at the fantino, (jockey) and say “Go and come back a winner!” He says it to the horse.

I recounted my experience last week of watching a horse blessing and actually getting emotional. Fabio said that’s normal. “It’s not unusual to see members, 70 years and older, crying during the blessing,” he said. I get that. I went to a blessing in a contrada with which I have no connection and got choked up. I can imagine what it must be like for Senese, old, young, any age, who have a vested interest in the tradition and passion that is life in a contrada of Siena. So yes, I get that.

The Unicorn contrada, La Contrada del Leocorno, have 32 Palio victories, the first one was 1776. They last won in 2007.  One thing I saw in this contrada museum that I had not seen before was a Palio victory banner that had sculpture weaved into the fabric.  It was the victory banner from 1995 done by sculptor Alberto Inglesi.

The rest of the museum was like others, a showcase of historical costumes and Palio victory banners. And then there was this: a tooth from a narwhal, an arctic whale, mounted and displayed. It was a gift. The donor thought it looked like the horn of a unicorn, Fabio said.  It certainly does. That thing stood seven feet high.

Inside the church of the Unicorn, every painting is dedicated to John the Baptist. The church was built in the 1600s. All of the art was done by Senese artists in the same period.  In addition to the horse blessing, the church is used for special ceremonies but not masses. “We’re not a parish,” Fabio said. None of the contrade are parishes.

When our tour was over, I thanked Fabio the lesson of the Unicorn contrada, and he returned to the front door, with two other friends, ready to welcome other guests.

A bird finds a nice perch on the horn of the unicorn at the fountain in the unicorn contrada.

Fabio, the general manager of the Unicorn contrada’s church and museum. He’s seen eight Palio victories for the Unicorn, twice the horse finished without the rider. And that’s OK.

The ceiling of the church of the Unicorn contrada.

Helmets of fantini, or jockeys.

Historic costumes flank the silver masgalano, the prize given to a contrada for excellence in the corteo storico, the parade before the Palio. 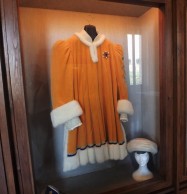 Traditional vestments for the corteo storico. Note also the hat and the wig to the right. 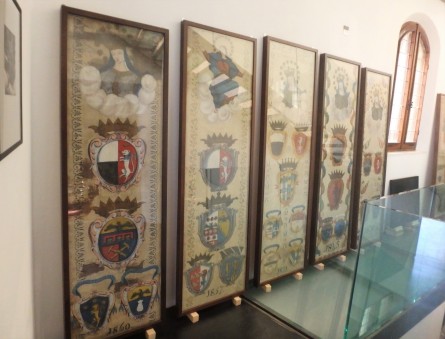 Palio victory banners from the 1800s in the Unicorn contrada museum. 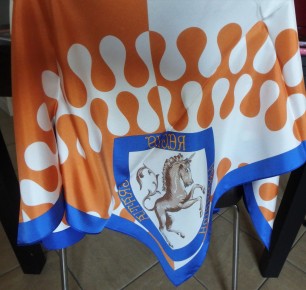 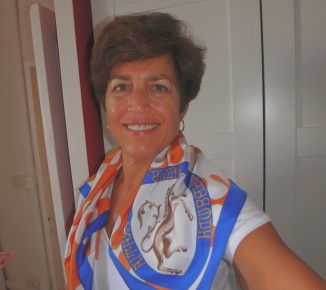 Me with the Unicorn fazzoletto.

One thought on “A Visit to the Unicorn Contrada”