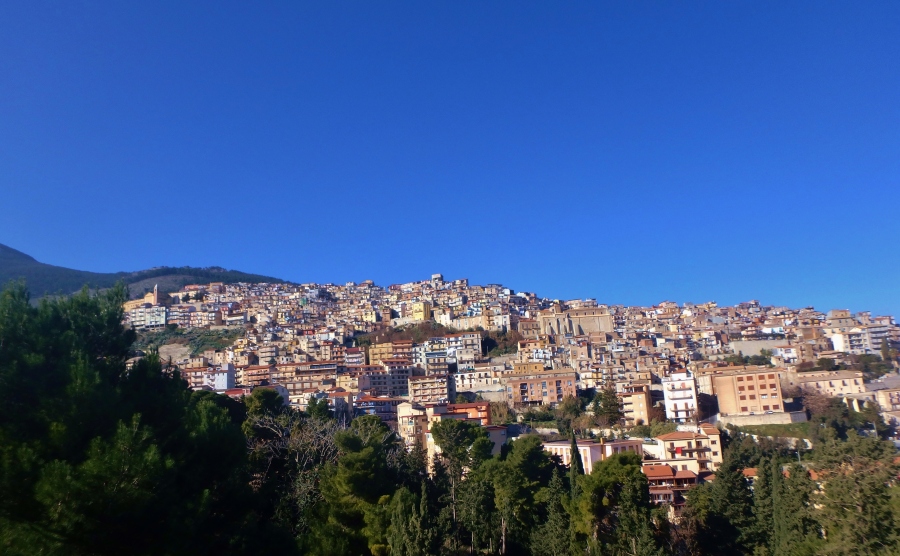 I love discovering Sicily. It’s not only where my familial roots are planted – my mother was born here and my father’s family is from here – it’s simply a joy to travel around a place so different from the rest of the boot.

Luckily for me, my mom and her brothers went back to Grotte, their hometown, almost 40 years ago, thus opening the gates for the rest of us to discover our history. “I fell in love with all the realities the first time I saw them in 1979,” my Uncle Charlie told me. “I wanted to discover the land of my birth. I also wanted to know how much my life was different from theirs.”

Uncle Charlie could start his own Sicily travel agency, he’s been back so many times. I drove around with him and cousin Ted in 2009 when we were in town for my cousin’s wedding. It seemed like every place we stopped, Uncle Charlie was always greeted with a big smile and handshake from someone. Does he know everybody in Sicily?

When I was in Grotte this past December, my cousin Vincenzo treated me to a day in the countryside and took me to Cammarata, an area I’d not yet visited. This is a town planted on its famous mountain, about 20 miles from Grotte.  It’s also an area known for its pecorino cheese production.

During the drive, I admired I admired the landscape, of course. This wasn’t Tuscany’s lush green rolling hills. Sicily is wild. Sicily is dry and rugged with its own hills and valleys.

The pecorino zone has more than 30 caseifici, or dairies, where the cheese is made. We stopped at a caseificio called Tumarrano and the cheesemaker Giuseppe gave us a tour.  The last time I was in a place like this was in 1996, outside Parma. I was lucky enough to take a tour of a caseificio that made Parmigiano Reggiano.

The concept is the same – cook the milk, here it’s from pecora (sheep), put the almost-cheese in a form, soak it in brine, age. And just like Parmigiano, the cheesemakers here do not use any preservatives to coagulate the milk. They use a natural fermenter. Basta.

The first thing we see when we walk in are buckets of ricotta ricotta cheese on a cart. Ricotta is used often in Sicilian cooking. It’s also eaten as is, with a spoon, or  served out of a bowl and spread on bread.  If you ever have a chance to eat fresh ricotta or even make it yourself, you will taste quite a difference from what you’ve ever bought in the grocery store. Trust me on this.  (By the way, it’s not that hard to make. My mom and I did several times. Cook milk for several hours, leave overnight, strain with cheesecloth, eat.)

Giuseppe, at Tumarrano, has been making cheese since he was young, working with his parents at their farm. “I’ve seen it grow into a passionate thing,” he said when I asked about the popularity of visiting the dairies and tourism in the area.

They cook the milk in big vats. Then once the milk starts to coagulate and turn to cheese, they put the forming-cheese into these big round forms where they sit and then submerge them in brine. And then they put them away in a room for aging. I got a little nervous when I saw mold on them. Giuseppe said that’s all part of the aging process and, in fact, if there weren’t mold on it, that would be a problem.

The pecorino comes in a few different styles: fresh, aged and older or pecorino with peppercorns. They also make the afore-mentioned ricotta and cream of ricotta, which is ricotta with sugar ready for cannoli. Giuseppe pulled out a bucket of the cream from a freezer. “Right here are ten cannoli,” he said.

After the caseiuficio, we headed up to the town of Cammarata, and the mountain. Now, I hope I can explain this well. We were driving along a winding road, we turned the corner and boom! There was this town, this maze of rooftops just stuck on the side of a mountain. I was actually awestruck because I didn’t see it coming. You don’t see it in the distance. I feel like it’s almost an optical trick.

As I admired this fabulous view, we stopped in the town of San Giovanni Gemini for a coffee. And a mini-cannolo, because that’s what you do in Sicily- you stop and get a cannolo with your coffee. The town was literally across the street from the boundary line of Cammarata.

So we snake up the mountain behind the houses and just keep going up and up and have lunch at Il Primo Rifugio, a wonderful restaurant, located almost at the top. No menu. We just ate what they were cooking that day and they brought us many plates of salumi, bruschetta, olives, sweet peppers, guanciale, meatballs, cheeses, ravioli, penne with meat sauce and then some cannoli and fresh fruit. I loved it because I was treated to little tastes of a lot of dishes, made with all local products.

“We do a tasting menu of everything that’s fresh and in season,” said one of the owners Graziella Felice. “We don’t do a menu. If it’s fresh, we serve it.”

The restaurant has been there for 25 years with a steady clientele of locals and some tourists, even with the drive up the mountain to get there. And they were booked on Christmas Day. “It’s a day for everyone to go out. They’re tired of cooking and they’re tired of cleaning,” Graziella said, laughing.

After lunch, we continued our ascent to the top of Mt. Cammarata on a narrow road that cuts through a thick forest. At the top, we were up nearly 5,200 feet and even caught a glimpse of Mt. Etna in the distance. Clouds hung below us and the air was so clear and crisp.

And so I chalk up another splendid day in Italy, my homeland, which continues to amaze me with its beauty, no matter where I go or what I see. Villages with stone streets, mountain tops in the clouds, rustic wilderness, cypress-laden roads, castles, abbeys, sunsets behind cathedral domes, mists in the valleys at the break of dawn.  That’s what I’ve seen so far. I very much look forward to what’s ahead.

I belong in Italy. 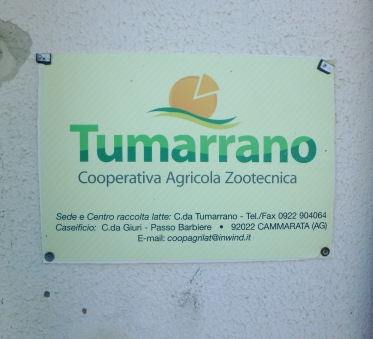 Dairy Tumarrano in the pecorino zone of Cammarata. There are around 30 dairies in this area, producing delicious pecorino cheese.

Aging wheels of pecorino at the Tumarrano dairy.

Form of pecorino with peppercorns submerged in brine at the dairy.

Forms of pecorino aging at the caseificio. Yes, that’s mold and yes, it’s a good thing. 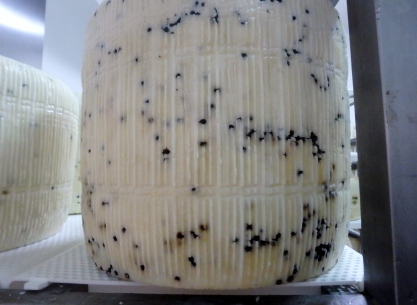 A form of pecorino with peppercorns.

Our guide and cheesemaker Giuseppe

Where the cream of ricotta is made. This is ricotta with added sugar, ready for cannoli. 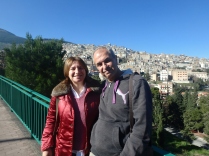 Cousin Vincenzo and Letizia with the fabulous view of Cammarata in the distance.

Classic. Vincenzo said he drove one just like it many years ago. Then the owner showed up while we were gawking at it.

Building facade in San Giovanni Gemini. If you walk a little farther down the street, you’ll be in Cammarata proper.

Again, the fabulous view of Cammarata, a little closer.

And in the middle of the mountain is a delicious restaurant. No menus. They serve whatever is fresh and in season. 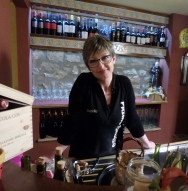 Co-Owner Graziella Felice. “We do a tasting menu of what’s fresh and in season.”

There she is. The beautiful Sicilian countryside with Mt. Etna the distance.

The view of Cammarata on the way down the mountain.

Closer view of the town as we descend