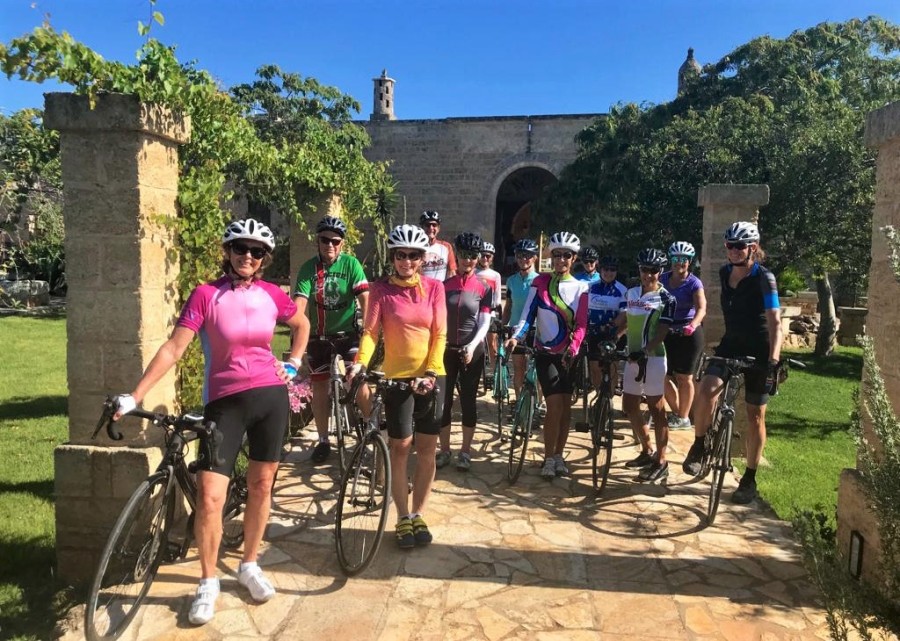 I have traveled all over Italy – from hiking in the Dolomites to driving around the Sicilian countryside with my cousin in a Jeep – but I’d not yet been to Puglia, Italy’s “heel.” So I decided to see it on a bike tour. Because . . . Italy.

It was a fantastic and life-changing trip. We had sunshine and a gorgeous blue sky every day. I was in a group of 12, several of whom were friends and acquaintances who have gone on several rides together, including in parts of Italy.  They’re also runners and hikers. Except for one other person, who was also there as a single and is two years younger than I am, the rest of the group was 60 and older. Even though I was in the back of the pack every day, they were my mentors and pseudo-coaches for every ride. I consider myself very lucky to have been in such an encouraging group.

I signed up for the trip in March and bought a bike in May. Despite nine years of teaching Spinning, I found myself almost learning how to ride a bike again. Some cycling friends joined me on a local bike trail on the weekends (I will not ride on the streets here with traffic) and I quickly got the hang of riding a bike with 21 gears, clicking out of the pedals and putting my foot down at a stop. I also discovered the importance of padded cycling shorts (ouch!)

The touring company I chose is FoodStoriesTravel.com. Owner Cristiano Bonino designs the routes, rides the routes, organizes up-close and personal meetings with farmers and restauranteurs and plans a full-immersion experience. He wrote in an email that the title and focus of the company comes from the fact that his heart has been in food and its stories since he was a boy, watching grandmother in the kitchen. He wanted to create experiences that his grandmother would recognize and “not be gimmicky at all, but that would honor and reflect how she thought about and made food for her family. I think people are hungry for this sort of essential human experience and connection.”

I didn’t know a lot about the region, only that it was home to the Trulli, the buildings with the conical roofs.  Fast forward to September and I was on my way to Puglia, helmet, pedals, clip-on shoes, gloves and shorts in tow!

DAY ONE: WARM-UP RIDE TO ACAYA

I arrived in Brindisi the day before the first ride, to get a feel for the bike and the area. (We rent the bikes through Cristiano.) I landed early in the morning on a flight from Bologna. Everyone else arrived throughout the day. I met Cristiano and our other guide Suzie at the masseria, a farmhouse on an estate that has been renovated into a hotel, where we were staying for two nights. (https://www.masseriachiccorizzo.it/#). I told him I hoped I didn’t hold everyone up on the rides because I’m going to be taking a lot of photos and I’m a rookie. “This is your tour,” he said. “You go at your own pace.” That was reassuring. 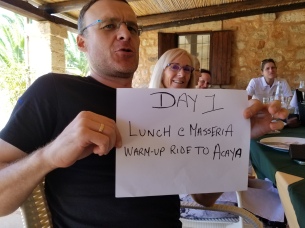 And here’s our host – Cristiano Bonino! 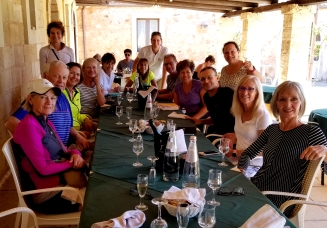 Here’s the fabulous group I biked with for seven days.

So the next day, Day One of the tour, we all met for a big buffet lunch and Cristiano and Suzie explained the drill: every day he’d explain the route, which included a stop for a coffee in the morning, and another stop on the way back. He and Suzie would alternate riding in front on a bike and driving the van in the back.  And they explained how we’d discover the cuisine full of vegetables, most notably chicory, and wines of the region. The most famous is Primitivo, but we’d also be introduced to Salice Salentino, Negroamaro and a sparkling Piccolebolle. So don’t ask for your Chianti and Prosecco here, he told us.

That first day, the 25-mile warm-up ride to a nearby small town of Acaya, started pretty routinely. We saw the map, we had our Garmin GPS programmed, our bikes were fitted to our specs, our water bottles were filled, the bikes’ front and rear lights were flashing and we were off.

Five minutes later, I got a flat tire. “I think that’s a record,” Cristiano said.  Not only that, my right shoe clip was stuck in the pedal so before I realized that I forgot to put my left foot down, I fell over, right on top of a small stone wall. Welcome to Puglia!

I hopped in the van, Cristiano put my bike in back and we drove ahead of everyone so he could change the tire and I could join as they went by. I was back on the road in less than 10 minutes, my scraped leg and bruised ego intact.

That warm-up ride was just a taste of what was ahead for us in the next six days. We rode along an olive-tree lined countryside every day. 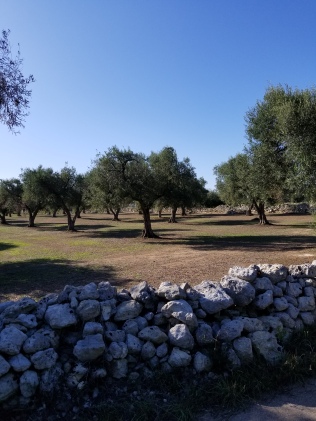 This was a daily sight. 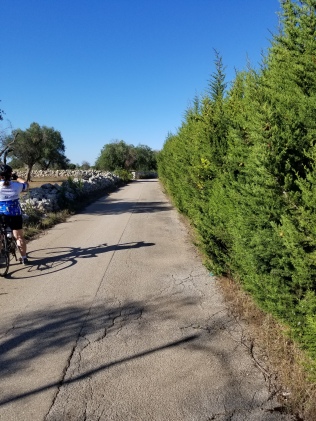 In Acaya, we admired this quiet town with its castle and preserved covered wells in the piazza and then made our way back to the masseria.  Puglia’s terrain is basically flat but we had our first climb on the way back. All those strength rides in my Spinning classes were about to pay off.    Luckily, Italy drivers respect cyclists on the roads and I was never worried about riding on the roads. 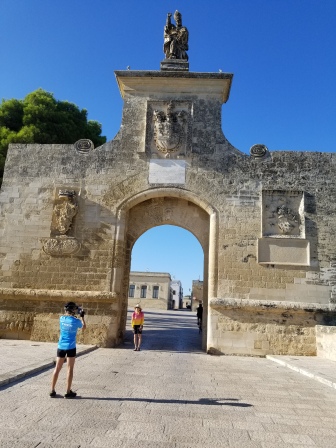 The entrance gate to Acaya and two of my fellow cyclists. 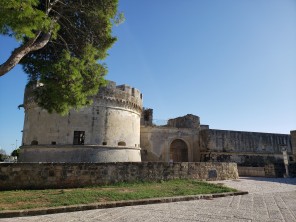 The castle of Acaya, our stop in our warm-up ride. (photo: Melanie F.)

Our bikes in front of the covered ancient wells in the piazza in Acaya (photo: Melanie F) 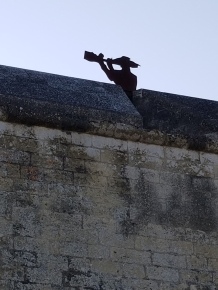 This was on top of the castle in Acaya. 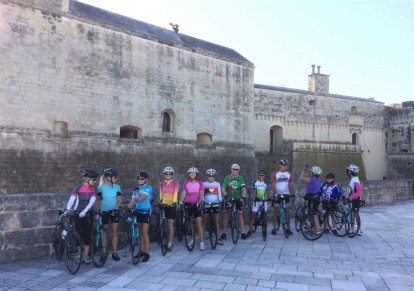 The group, with just a few of us distracted, including me taking a photo of something else. (Photo: Melanie F.)

That evening, we toured the grounds of the masseria, with owner and proprietor Donato Carcagni. He showed us around the main building and his fabulous vegetable garden, pulling out sage, mint, basil and pepperoncini. Before dinner, we were treated to an olive oil tasting with focaccia and Piccolebolle wine. 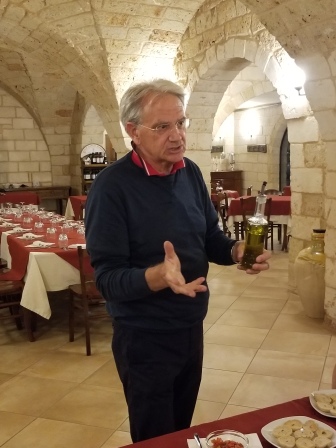 Donato explaining the olive oil making process and how to tell a good bottle from a bad one. and how acidity level should be 0.5%. 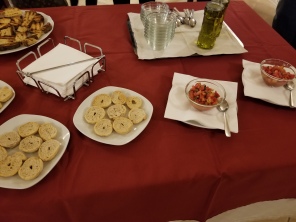 Friselle (crunchy bread) and tomatoes at the ready for the olive oil tasting. (Tomatoes in Puglia are some of the best I’ve ever eaten) 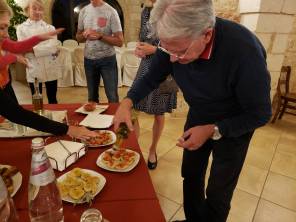 Dinner was pasta-less and heavy on vegetables that included local specialty chicory and mashed fava beans. Fried and breaded anchovies, rooster and potatoes were also on the menu, all complemented with Negroamaro wine. 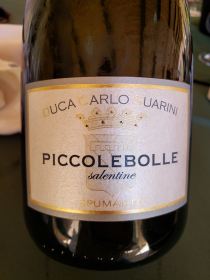 Piccolebolle is a sparkling wine of Puglia. (Photo: Melanie F) 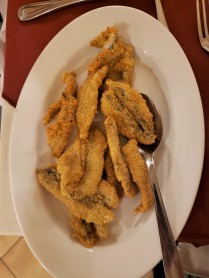 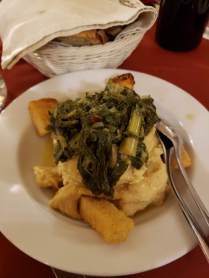 I survived the first day, flat tire and scraped leg and all. The adventure had begun.

Views around the masseria 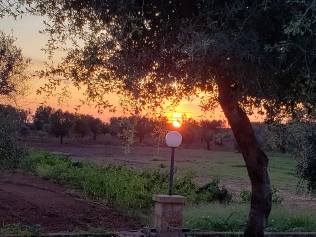 Nice photo! Thanks for taking it Melanie. 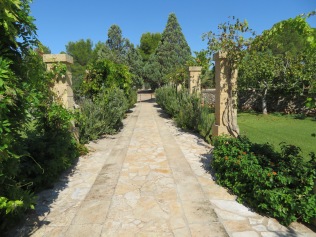 The entrance to the masseria, looking out.

Olive trees on the grounds of Masseria Chicco Rizzo, where we stayed for two nights.

The grounds of the masseria. Rows and rows of olive trees.

Yes, there’s a pool at the masseria. And it was lovely. 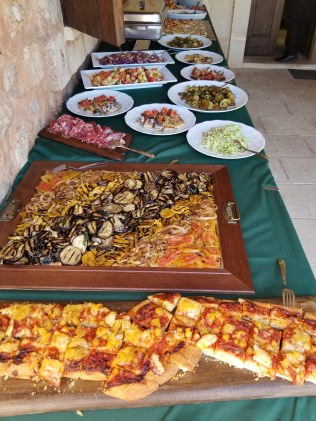 This was our first day’s lunch at the masseria. Everything was delicious. (photo courtesy of Melanie Friedlander) 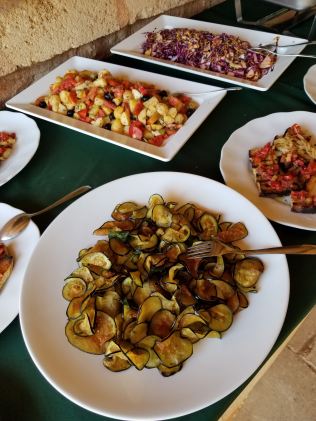 Buffet lunch at the masseria. That’s eggplant. So good! (photo by Melanie Friedlander) 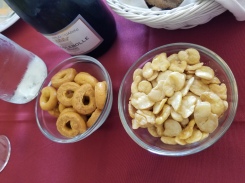 On the left are the highly-addictive and oh so delectable taralli. The right are crunch fava beans.

That’s me, chilling in the sun, on the day I arrived in Puglia. 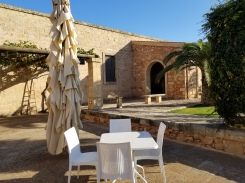 The view outside my room at the masseria

6 thoughts on “Cycling in Puglia: A six-day adventure!”