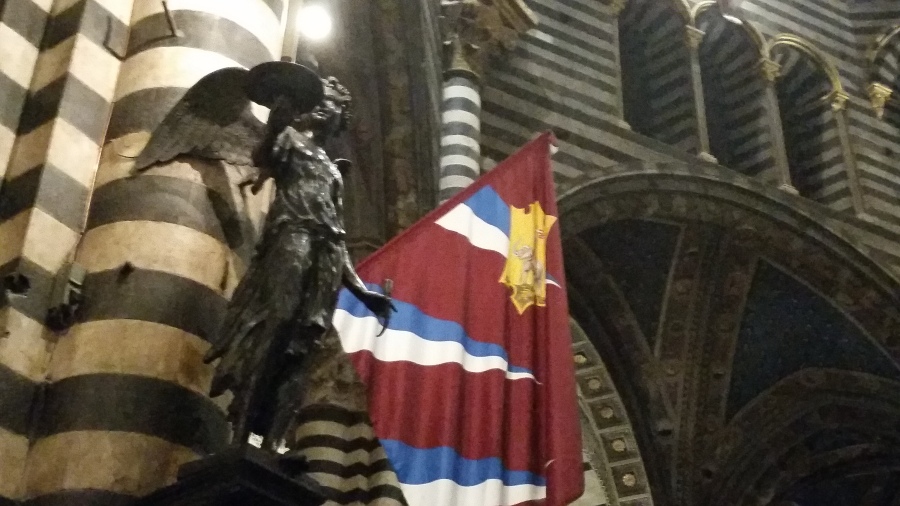 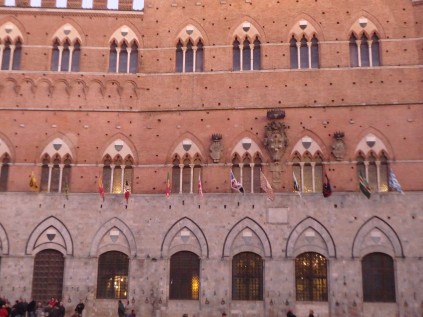 The march starts in the Piazza del Campo. The flags represent each contrada.

Sant’Ansano march through the city. This is the Torre contrada.

Inside the Duomo of Siena for mass to celebrate Sant’Ansano and the contrade.

Priest procession. Each is wearing a vestment with their contrada symbol on it.

The contrade flags displayed inside the Duomo.

La Torre banner inside the Duomo 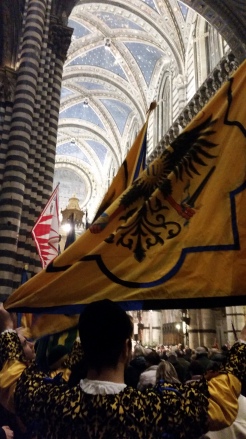 Aquila contrada flag bearer during mass inside the Duomo

Tartuca Flags in motion, inside the Duomo. 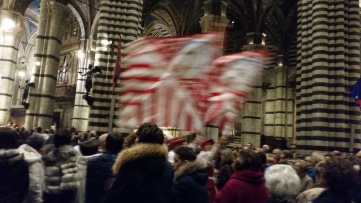 Leaving the Duomo after mass.

December 1 in Siena is a holy day for the city. The Sienese celebrate their patron saint, Sant’Ansano with a march by members of the 17 contrade from the Piazza del Campo to the Duomo, where they then celebrate mass. For me, this was an experience like none other. It is filled with history and tradition.  Each contrada, a district in the city, is represented by a drummer and two others who carry their contrada’s banner, waving them in fluid rhythmic synchronicity.  Behind them are the captains of the contrade and roaring trumpeters. It’s medieval and very moving. The march begins at the Piazza del Campo, the main piazza in the city where the Palio is held, and ends at the Duomo, the medieval cathedral built in the 13th century.  A refresher: every July 2 and August 16, the Palio, the traditional horse race, is held in the Piazza. Ten contrade are represented in each race.  You can look for me in the middle of all of it on July 2, 2016.

What struck me the most about this evening was the way this city’s residents hold true to so many traditions.  It was simple yet elegant. Everyone in the march knew its importance. There I was, attending mass in the Duomo, with Sienese, young and old, wearing the scarf of their contrada around their shoulders. A priest from every contrada participated, each wearing a red vestment with the symbol of his contrada on the back. Try to imagine if, at the start of major league baseball season, there was one big mass for your team and all the parish priests attended and wore jerseys and caps and insignia on their vestments.  And everyone in the church prayed for the pennant.  (Maybe this already happens in parts of Chicago. I don’t know.)

It was a magical evening. I felt lucky to participate in such a wonderful tradition. I am enamored of you Siena!

6 thoughts on “Sant’Ansano and the march of the contrade”